After a long dark winter, Rotary Club's planting brings a glimmer of hope 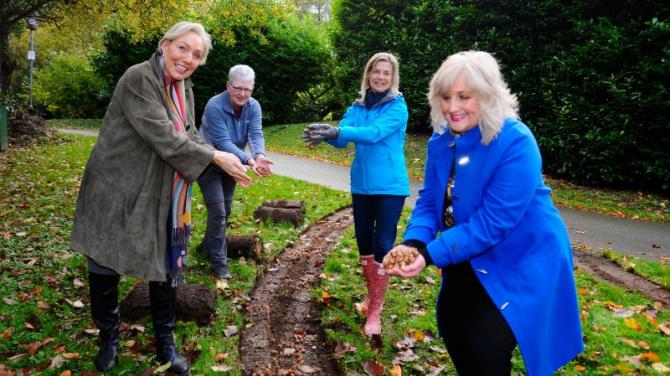 AN eruption of colour in Randalstown offers some hope that there is finally a glimmer of light at the end of a very dark tunnel, the Rotary Club of Antrim has said.

Just a few months ago Rotarians and volunteers from Tidy Randalstown gathered to plant bulbs to create a sea of purple at the viaduct - to bring a smile to local faces and highlight their ongoing work to eradicate polio.

Rotary world-wide have been involved for the last 40 years to stop the ravages of this killer virus.

Rotary use the colour purple to symbolise polio awareness.

Traditionally when a child was vaccinated their little finger was dipped in purple dye to show they had been given the chance of life without polio.

Polio is still active in very small pockets of the world, both Afghanistan and Pakistan still have a small number of active cases.

Hopefully the public are now more aware of the significance of the colour purple and the need for rotary to try and eradicate the virus completely.

Worldwide vaccination also keeps the virus from our own shores.

Rotary have unique ways to raise money and awareness for their polio project, including purple gin, purple ice cream and purple crocus croms.

A spokeswoman said: “Rotary Club of Antrim decided that the purple crocus project would be ideal as different communities could benefit from this.

“Really it is the gift that keeps giving.

“Two of us were able to join up with a couple of volunteers from The Tidy Randalstown Group.

“The purple crocus croms for Randalstown were sponsored by Antrim Rotarian, Sheila Hillon.

“Tidy Randalstown and Rotary club of Antrim are very grateful to Sheila for her support.

The purple crocus croms were planted along Randalstown viaduct.

“Helen Boyd, the driving force behind Tidy Randalstown was hard at work long before we arrived,” she continued.

“The Randalstown group have been doing a first class job in the regeneration of their town.

“The streets are in a pristine condition and there are flowers, trees and plants in every spare corner.

“The blaze of autumnal colour is a sight to behold. The appearance has certainly attracted shoppers and tourists to this historic town.

“Much of this credit goes to Helen and her group of hard working volunteers, the sponsors, the litter pickers and of course the council who are actively involved.

“Rotary is about being involved with communities.

“The enthusiasm and hard work of groups of volunteers have turned Randalstown into a must visit spot.”

When the bulbs were planted a vaccine was still some way off, but they remained optimistic that one would soon arrive - just as it had for polio.

“At a time when there are so many restrictions, meeting Helen and volunteer Linda Houston made me realise that pride in our community is not banned, exercise is not banned and most importantly friendship is not banned.”

And now the flowers, and a vaccine, are here.

“ This not only reminds us about the obstacles that were overcome during the polio war but it gives us hope for the future that the COVID fight will be won.

“When the crocus croms were planted it was a cold dull day in late autumn.

“We didn’t know what was ahead of us with the pandemic and we were moving closer to winter , with dark days and even longer nights.

“With spring and the blooms coming out it serves as a reminder that there is hope and light at the end of the tunnel.”