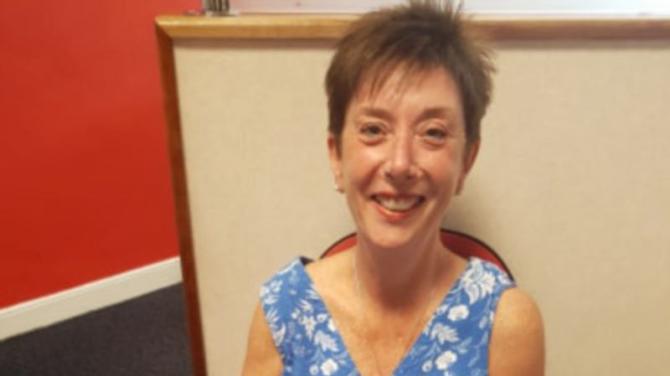 JANICE Pankhurst, like her mother before her, is Riverside born and bred.

The house in which she grew up, and in which her sister now resides, was once a doctor’s residence and was split into three homes.

You could almost say that the Six Mile Water flows through Janice’s veins, such is her attachment to the street where she grew up.

Her parents, Olive and Ernie, with her father hailing from Aldergrove, moved into the house in 1960 and soon welcomed Janice and her younger sisters Dawn and Elaine.

Olive had worked in the post office and returned to Greystone Post Office following a spell in the school kitchens at Antrim Primary School, once the children were ‘up a bit’.

Ernie was a well-known butcher in the town at the family firm and also worked at Lamont’s factory and the old Department of Finance.

“Riverside and High Street were the most affluent parts of the town, everyone knew everyone, there were lots of families and it was a very tight knit-community,” Janice said.

“There was Belmont Park, a development off Riverside, and Chimney Corner Football Club, where Riverside School is now.

“Chimney Corner was a very successful team and I used to like watching the matches.

“I know some of the former players, like Freddie Miller, Cleve McVeigh, Tommy Craig and Geoff McGirr - they all play golf now.

“Francis Madden’s house was the former club house and there was a water pump where the players used to get a drink - the handle has been removed and it is very overgrown, but it is still there!

“When I first moved into my own house in Riverside, it was one of the old mill cottages, there was one cold tap and an outside toilet.

“My aunt and uncle, Emma and Johnny McMaster, lived at Bank House, which is now a block of flats.

“It had been an old corn bank where farmers came to exchange money for corn.

“There was a big safe in the drawing room and a flight of stairs at the front and the back.

“My sisters and I stayed there if my mother was working or had to go away and I slept in the room next to the graveyard at All Saints, and my aunt would tell me not to be afraid!

“There was a cobbled yard and a walled garden where she used to grow fruit and vegetables and flowers.

“It was a great place to grow up and it was there that I met Sandra McMeekin, who has been one of my oldest friends, since I was three.

“She and my sisters all played together.

“Where Riverside Mews is now, there was a small Presbyterian Church at the front and a huge manse out the back. I think the family lived in just one wing.

“I always wanted to explore that place, I would have loved to have looked round it when I was a child.

“Mrs Lowry who used to own the bakery on Church Street, lived in number 15 and her son Clifford, who is now a very accomplished musician, was in my year at school.

“There was Mrs Miller and her sons, she was my Godmother, and Pauline Clarke.

“The Hannans lived down Riverside and Sam was a great hunter and fisherman.

“I remember when I was about nine years old, delivering church magazines, and there was a rabbit hanging at the front door that someone must have left for him, it made me jump!”

Janice has very happy memories of her family home, where one of her sisters now lives.

“My mum was a great dressmaker and a great baker,” she said.

“She encouraged us all to do well in school and do the best we could and I used to look forward to dark winter nights, she would put the fire on and we would play games like dominos, drafts, whist and trumps.

“There was a lot of fun and laughter growing up.

“My father was a successful pigeon racer and although there wasn’t a lot of room out the back of the houses at Riverside, he had a loft.

“It was a real family affair, we helped him train.

“Saturday was race day and we weren’t to be out the back until the birds came home.

“We used to clean the loft and when I changed my car from a Mini to a Citroen AX the first thing he did was look in the boot and say ‘the big hamper will fit in there!’

“He even got my mother to become secretary for the Muckamore club!

“My father was a great whistler, he was always whistling, he had great hands and made the loft himself.

“My parents always encouraged us to have hobbies and to make something of ourselves.

“I was a great reader and I still am. I love John Grisham books.

“When my mum and granny went shopping, I stayed at the butcher’s, beside Billy’s Cafe in the room upstairs, all I wanted was a book brought back from Camerons.

Janice attended Antrim Primary and Antrim Grammar before going on to University in Coleraine, graduating in 1984 and going into primary school teaching, working in Glengormley and Carrickfergus before spending time in England, in the East End of London and at a special school in Basingstoke before returning to a job in Larne and then, eventually, back to Antrim Primary.

“I loved it when I was a pupil at Antrim Primary,” said Janice.

“I especially loved Mrs Horn’s class, and it is fitting that I now teach in Room 12, Mrs Horn’s music room.

“When I started working in Antrim Primary it was really hard for me to call her by her Christian name but she went on to become a really good friend and we have even been to New York together.

“Enkalon opened when I was at Antrim Primary and the population of the town suddenly exploded.

“Classes were farmed out to all arts and parts. Some of my classes were relocated to Massereene Primary, which is where the British Legion stands now.

“Others went to the church hall at All Saints.

“The size of the town seemed to double overnight and there weren’t enough classrooms or teachers for all the extra children.

“Then came the invention of mobile classrooms, or the ‘huts’ as we called them.

“Josephine Harbison spent her entire teaching career in a mobile!

For a shy girl from a market town, going to Coleraine was the making of Janice.

“I was very shy but I shared a house with fellow Antrim student Angela McAuley and a few other girls and that really helped bring me out of my shell,” she said.

“I loved it and there was a lot to do socially.

“A lot of us came home at the weekends and had Saturday jobs and we would get sent back to Coleraine with food parcels on a Sunday night - it seemed like a million miles away back then!”

She has seen a lot of changes in education over the years.

“Computers are the biggest change,” she said.

“Years ago I didn’t know how to turn one on but now I update the website!

“I’m still a stickler for proper grammar and I am lucky to work at what I consider is the best school in the town.

“I’m now teaching the children of pupils that I taught years ago.

Janice is approaching 30 years in Antrim Primary School and is currently the second longest-serving teaching staff member after Julie Moore.”

Firm friends to Janice in the teaching profession have included David Black and Carol Mairs.

“They have been there from the start and I learned so much from them, they were great to work with and we are all still in touch.

“Carol went on to be a vice-principal at Moira Primary - they are both retired now.

“Josephine Harbison was a great colleague, and Nancy Bonar.

“We were in The Loves of Cass Magire by Brian Friel together, we did quite a few by Friel and Sam Cree, like Widows’ Paradise.

“I remember there was one play called ‘Sink or Slim’ about a health farm and I had to play a character who was fat.

“As my mother was a talented dressmaker, she made me a ‘fat suit’ with all the padding.

“I heard one of my friends in the audience roaring with laughter when she saw me and I had to bite the inside of my mouth quite hard, not to join in with her.

“We put on plays at Clotworthy House and we always had great audiences.”

Janice’s love for her home town is palpable and she is something of an amateur historian when it comes to Riverside - part of which was once also known as Mill Row after the linen mill which once provided employment and housing for much of the town and has now been converted into apartments.

And of course, she is indebted to her loving family for her idyllic childhood and upbringing.

“Our house was never empty, there was always something going on with lots of laughter and fun, I feel very blessed to have had the upbringing that I did, it was a lovely family life.”