From Belfast to Canada, then Pat made her home in Antrim 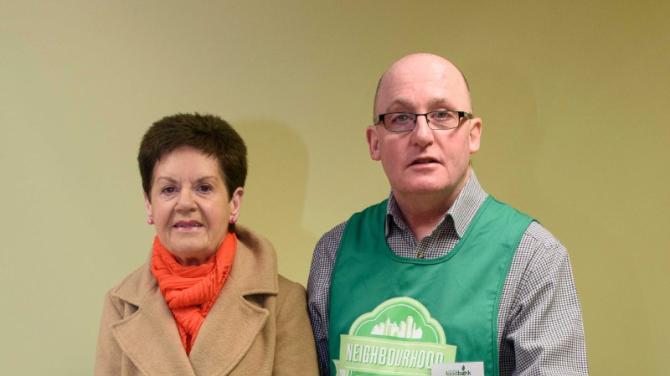 FROM Belfast to Canada and finally to Antrim – local woman Pat Dalton has a wealth of memories and experiences from the town she now calls home.

And she has certainly seen some changes since she first sat behind a desk at the Antrim Guardian, where she worked for 35 years as a receptionist, becoming a well-known face in the local community as the first point of contact for anyone getting in touch with the local newspaper, either in person or over the phone.

Pat grew up on the Lisburn Road in the south of Belfast before travelling to Canada to work and live.

While she did not start out in the newspaper business, she did begin her career in a building which was no stranger to making headlines – the Bank of Nova Scotia in Montreal.

On the Dominion Day (now Canada Day) long weekend in July 1961, Georges Lemay’s gang broke into the vault of the building and pillaged safety deposit boxes of cash, bonds and jewellery.

Exactly how much was taken has never been confirmed - estimates range from 600,000 dollars, right up to four million.

The heist required professional planning, timing and execution, and the digging of a tunnel beneath the bank building and Lemay was named one of Canada's most wanted criminals.

A film was even made about the robbery.

In shades of the more recent Hatton Gardens safety deposit box robbery in London, Pat said: “They had drilled holes and got into the vault, everyone was still talking about it years later.

“There was a big Jewish community and the women still came in, sometimes in tears, telling the staff how much they had lost.”

At times, Pat said she felt like her life was a holiday.

“The summers were beautiful,” she said.

“Sometimes I would go over the border to Vermont, there were barbeques at Lake Placid, I had never seen anything like it. I was used to Bangor or Portrush!”

However Pat was conscious that her contemporaries at home were living very different lives.

“My family came out to visit me, and I went home on holiday, I saw that people I had gone to school with were married, they were buying property, I was well paid but I felt like I didn't have anything to show for it,” she said.

“In places like Canada and even in Europe, people are used to apartment living, but it wasn't like that for me, having grown up on the Lisburn Road. I wanted a front door of my own and a bit of a garden. I was also travelling 90 minutes to and from work, it was a long day.”

After four years and in her 20s, Pat returned to Northern Ireland.

The Troubles was making Belfast a dangerous place to be, and with her husband securing a job in the Maintenance Unit at Aldergrove Airport, Antrim seemed like a safer bet.

Pat first moved into a 'lovely' maisonette on the Dublin Road with views over Lough Neagh, however back then, the town was not so populous.

“It felt like I was out in the wilderness!” she laughed.

“I would still go into Belfast for my shopping. We later moved to the Steeple and I really became settled. There were other people from outside the area from Belfast and because of British Enkalon, there were families from Derry, Omagh and Strabane.

“I made friends and I joined the Steeple Housewives Club, we had outings and social events and nights out in Hall's Hotel.

“We also went to the Deerpark Hotel and the old Airport Inn.”

Other memories include the Ulster Workers' Strike of 1974, when towns were blockaded and electricity was cut off for hours at a time.

“The Massereene Hospital was open for mothers who needed to heat bottles to feed their children, it was a scary time,” she recalled, although she said that unlike people living in Belfast, she would have been happy to walk from the Dublin Road to Steeple in the dark because she felt much safer.

Pat, who now lives off the Greystone Road, started at the Antrim Guardian in 1982, on the same day that Noel Doran, who is now editor of the Irish News, left his job as a reporter.

With over three decades under her belt at the paper, Pat says that the media landscape has changed beyond all recognition.

“I had an opportunity to move to Belfast in the 70s, but I had settled in Antrim, I had made friends and it was more peaceful,” she said.

“The Antrim Guardian had a female editor, Anne Montgomery, which was really unusual in those days.

“Back then there was so much more advertising, we were really busy and the paper was bursting with ads.

“Because of Enkalon and all the other employers, there were new developments being built to house the employees.

“The estate agents all wanted to sell their houses, the tradesmen were looking for work, the furniture and appliance stores were doing very well.

“If you wanted to sell anything from a needle to an anchor back in those days, you did it through the local paper.”

Pat began her Antrim Guardian career at the old office on Church Street, formerly an art gallery, first shared with Reynolds and Barrett across the hallway and latterly, the Ulster Unionist party.

“(Former South Antrim MP) Clifford Forsythe was a lovely man, I remember him well,” she said.

“Back in those days we would run across the hall to each other if we needed anything and one day the office was running low on sugar so I went over to ask if I could borrow a cup.

“I knocked on the door and Jim Molyneux (the UUP leader who later became Baron Molyneux of Killead) opened it.

“I was speechless and didn't know whether to pretend not to know who he was or just brave it out and ask for the cup of sugar anyway.

“Luckily Mr Forsythe was just behind him and saw I was a bit embarrassed and saved the day!”

Pat said that the changes to the industry were made gradually.

“The first difference we saw was the availability of credit,” she said.

“It used to be, that if you needed money or you needed to buy something, you had to sell something to make the money.

“When credit became available, people were able to go out and get what they needed. But the biggest change was the internet. When people could advertise online for free, going into a newspaper office and paying for an advert didn't seem so attractive any more.”

Pat was very fond of the Antrim Guardian’s former owner, Robert Troy, and remembers when the paper sponsored events like a Teddy Bear's Picnic and even a beauty pageant competition.

And the industry in which she worked was not the only thing that was changing. Antrim itself was undergoing a dramatic shift.

“I remember the bomb at Hall's Hotel and when it closed, that was a terrible loss to the town,” she said.

“When Enkalon came, so many people came with it and two schools, Ardnaveigh High and St Malachy's High, were built.

“When it closed, it was dreadful and had a big knock-on effect on all the businesses. There were 12 or 13 pubs in the town and there were individual shops and businesses around Castle Street that have all now gone.

“We were very excited when Wellworths came to Antrim, and then Stewarts, and then they went as well. We thought we were lucky to have Hall's and when it went, we were happy to have the Deerpark – and then it went too!

“I used to do courses at the old Tech in Railway Street, and then it moved up the town and became the North East Institute – and now it has gone as well.

“Antrim had a big military background too, and when the army and the RAF went, the town lost more trade.”

Those trades and tradesmen and women are now long lost to the town, never to return.

“The milkman would come door to door, every morning,” she said.

“There was a bread man too and a fish cart on Fridays.”

Pat retired in 2017, but the busy mum-of-three and grandmother has no intention of slowing down.

Speaking in 2018, long before the coronavirus pandemic “I'm a member of the University of the Third Age and I am a long-time member of my local Ceili Club,” she said.

“I love dancing and it definitely keeps you young, happy, fit and active. I have lots of friends from the club and we go away for weekends and have lunches and celebrate achievements and milestones together.

“I also help out at a foodbank and I still love my shopping!”

With that in mind, Pat also remembers the heyday of Castle Mall.

“It was a great place in the early days,” she said.

“There was Easons and Ronnie Millar's record shop. My son worked in the Bailiwick and spent most of his wages in Swamp, the menswear shop!

“Stewarts was where New Look is now, but of course, like in other towns, when Tesco came, it went.

“Now we also have Junction One. It would be great if more people spent their money in the town but people now seem to go to Belfast or Ballymena.”

But for Pat, in Antrim, there is no place like home.

“There have been many changes but it is still a great town and I am happy to have lived and worked here and brought up my children,” she said.

“The Castle Gardens and the Lough are wonderful, I wouldn't want to be anywhere else.”