From history to 'her story' 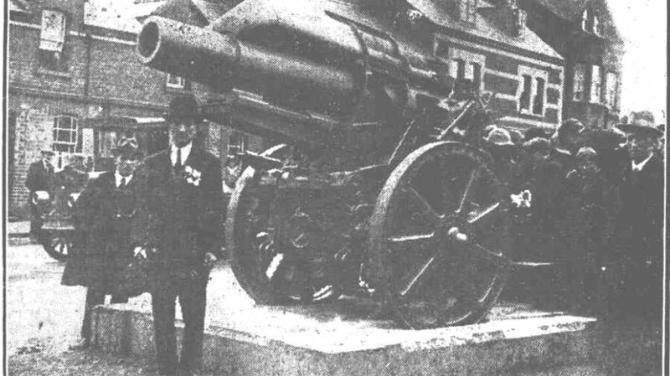 2020 was due to be a big year for Josephine Harbinson and the members of Antrim and District Historical Society, celebrating their 40th anniversary.

But while coronavirus put a spanner in the works, the local woman’s own history is every bit as interesting as some of the people she has researched over the years.

In a feature originally published in 2019, Josephine told how she was born and bred in Antrim, growing up at the ‘top of the town’, one of two girls and two boys.

Her father was a carpenter and joiner, who was always being called upon by his neighbours to come and fix things!

Josephine remembers playing in the area called ‘The Gun’ - even though the gun itself was long gone.

The eight-inch Howitzer was captured from the Germans and was installed in Antrim after a huge ceremony in the 1920s.

It was sadly removed and melted down for munitions during World War Two.

“My brother could remember it and told me all about it,” she said.

“He said it was massive and all the children climbed on it.”

In later life she researched the gun, and found a newspaper article which described the dedication of the weapon.

“All the great and good of the day were in attendance.

“The gun itself was too big to pull through the town, so they used a smaller one which used to sit at Market Square.

“I found a newspaper report about it at the Public Records Office and it described how ‘all the Germanic rottenness’ had been removed to ‘make it look decent’.

“You couldn’t get away with that today!”

Josephine and many other residents still refer to the area at the top of Fountain Street as ‘the gun’, even though the item itself has almost passed from memory.

There was also ‘the hatchery’ at the top of Fountain Street, a house now owned by the Madden family.

“My daddy would have worked there as well; they would hatch on Tuesdays and Fridays and on Saturdays, and if they had too many chicks, they would send a box to our house and it would sit on the Aga cooker.

“My mother would say that the chicks were yapping when they were hungry, so she would spread some newspaper on the floor and let them out, and I would draw my legs up - I think that gave me my lifelong aversion to birds and feathers.”

Another favourite memory was visiting with another neighbour, Dr Graham of Massereene Hospital.

“He had a great love of horses, which was much more up my street,” said Josephine.

“We loved to wander around the stables.

“He had two jockeys working for him and every morning, one of them would bring horses to the top of Fountain Street and school them on a lunge rope - could you imagine that happening now, with all the traffic?

“Dr Graham owned a lot of land, all where Tarragon Park would be now.

“The last bit of Dr Graham’s fields would have been the small green at the top of Cunningham Way, but now that has been built over as well in the last year.”

Josephine attended the Bruce School before moving to the new Antrim Primary School.

“When we moved to the new school - but not before 10am, we were all marched down to the old Massereene School.

“Antrim Primary, from the start, was never big enough.

“Classes were shuffled around to the Orr School and back to the Bruce and the Massereene School.

“It was the joke that the headmaster spent his days going round all the different places collecting the day’s rolls.”

With no secondary schools in Antrim, Josephine headed off to Cambridge House in Ballymena.

“It was very different, much more formal,” she said.

“Antrim was much smaller in those days, everyone knew everyone, so it was difficult to get used to.”

From there, it was on to Stranmillis and eventually, back to Antrim Primary School - this time as a teacher.

Josephine taught P4 and P5 for 35 years and had the distinction of spending her entire career in education in a mobile classroom, or ‘hut’.

“I don’t think anyone ever expected Antrim to grow in the way that it did, especially when Enkalon opened,” she said.

“I don’t think any of the schools were ready, we didn’t have enough room, new schools had to be opened, it transformed the town.”

Josephine’s two daughters have also gone into teaching and have inherited their mother’s love of history.

“It was my daddy really that got me interested in stories,” she said.

“I loved to look things up, in books or old records and newspapers, and the advent of the internet has made things a lot easier too!

“I love hearing about the old characters, including people like Mrs McAllister who lived at Pogue’s Entry and smoked a clay pipe right into her later years.

“She was a very eccentric woman who loved fancy dress competitions, and dear help you if she didn’t win a prize.

“She walked so straight and upright.

Another favourite project was following the old road to Belfast, from ‘the gun’ area in the town, out towards Islandreagh and over to the Old Coach Road, which branches off from Templepatrick.

In some of her recent research, she has learned that there was a settlement called Massereene, quite apart from Antrim town, near where the Lough Road is now.

Josephine, her husband Matthew, who she met at First Antrim Youth Club (like many other couples, she adds) and their girls have been on many historical road trips.

“My husband had two uncles who served in World War I and he had always talked about going to see the battlefields but never wanted to make a fuss.

“The only time I have ever gone behind his back was to organise his first trip to the Somme.

“Now he leads his own tours and we have done them together as a couple as well.

“When our daughters were younger we would sometimes drive to Ypres and Belgium and to France to see the landing beaches.”

As well as her longstanding role with Antrim Historical Society, Josephine is also a member of the Executive of the umbrella group, the Federation for Ulster Local Studies.

She is currently helping another well-known Antrim history buff, Alvin McCaig, with his forthcoming book about inter-racial tensions in Antrim during World War Two.

The town was the scene of a confrontation between white and black troops in September 1942.

A black GI was fatally stabbed in a brawl with white US soldiers outside a pub close to Massereene Bridge, while a white soldier also suffered serious gunshot injuries, but survived.

“It used to be the story that there were bullet holes in the bridge but I never saw them and I was never able to prove it,” she said.

“I have read reports from an English soldier who said he was pleased to get away from his billet because his tent was riddled by bullet holes from the white and black soldiers shooting at each other.

“I was able to speak to Sadie Behan, who would have lived in one of the cottages near the Barbican Gate which have since been demolished, like so many other historic buildings.

“She would make a Sunday dinner for white soldiers one week and black soldiers another week because they couldn’t mix.

“She recalled answering the door to the black soldiers one Sunday while the white soldiers were eating, and said she nearly had to keep the door closed with her foot to stop them getting in and the white soldiers getting out to attack them; that’s how high the tensions were running.”