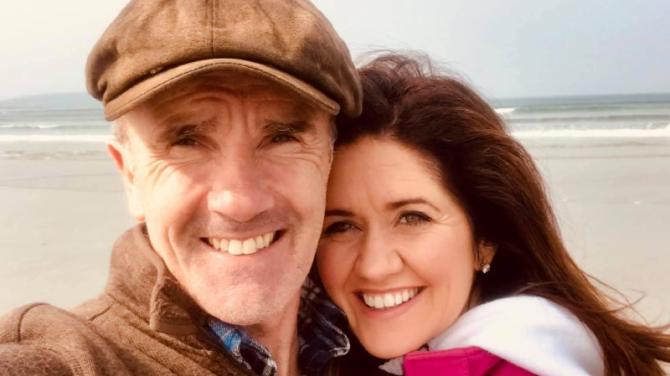 A MEMORIAL bench will be installed at Antrim Castle Gardens as a tribute to much-loved local man Arnie Clarke.

Mr Clarke (56) died the day before St Valentine’s Day 2020 after entering the swollen Shimna River at Tollymore Forest Park near Newcastle trying to rescue one of his beloved pet dogs.

The Antrim man, who had been living and working for Michelin in France, had been out walking with his partner Nichola McGregor (both pictured right) and her mother on one of his frequent trips back home when the tragedy occurred.

Arnie, who was a frequent visitor to the Antrim Guardian offices and featured in the paper a number of times, had been planning to return home permanently to help take care of his elderly parents.

The father of three and grandfather of five was well known in local sporting circles, and the ardent Leeds United fan also took part in wartime re-enactments - and loved to give people a spin in his vintage American jeep.

His funeral was one of the largest Antrim has seen in recent years and that brought some comfort to the heartbroken family - but Nichola had lost her ‘soulmate’ and was inconsolable.

The couple had bought a home in the new Castlewater development, almost opposite the Castle Gardens.

The garden of the home itself was featured in the BBC show Gardening Together.

With help from celebrity gardener Diarmuid Gavin, friends and family helped to transform the space into a haven for Nichola, with memories of Arnie and touches from France.

Arnie's son Tony described his dad as a chatty man who loved to socialise.

He said: “Last year he went to Tollymore Forest and drowned trying to save his dog.

“ He was really well known and grew up playing GAA so there were a lot of tributes after he passed.

“The Castle grounds in Antrim was where my father would have walked the dogs and he was always around there.

“He was a very chatty man and these grounds were his place to go to meet friends and to get talking to people.

“I approached the council through Neil Kelly, a local councillor, who has been great.

“There has never been a bench in the grounds before and dad's was recently given the go ahead by the council.”

The cost of the bench amounted to around £800 and with the help and generosity of friends and family of Arnie’s, a Go Fund Me page surpassed this target.

Tony thanked those who donated money to his dad’s bench, and said when they walk past it they'll get heart from it that they helped.

“I was really blown away by the support we have been given, he added.

“My dad was a super well known man and this bench is for everyone.

“The bench which will have my dad’s name on it, will hopefully encourage people to talk, to sit and have a chat because that is what my dad was all about.

“My daddy was 56 when he died and it was devastating.

“This is something positive coming out of that heartache.

“Dad was so social, that's why I think the bench is a brilliant way to honour his memory and I know the local community will appreciate that too.

“I just want to thank everyone who has been so kind, and to Neil Kelly who has been a massive support to our family too.”

Arnie’s friends and family are hoping that a fundraising 30k walk in his memory will also be able to go ahead soon.

The Bannside Ramblers had organised the Causeway Coast Challenge Walk last May, which had to be cancelled because of the pandemic.

His partner Nichola said: “We have been given permission to use this event to raise some money for the air ambulance in honour of Arnie and the amazing work they do.

“The last time we did it together. And of course there is a story.

“He packed both our back packs with all we needed for the walk made delicious sandwiches.

“When we stopped for lunch, he realises the sandwiches are still in the fridge at home - it was a much quicker march back to the car!