Can a Big Wheel save our summer? 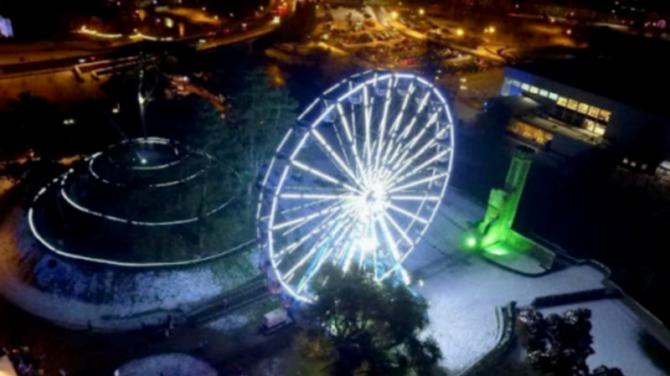 A BIG wheel could roll into town as part of plans for a recovery of the council’s events schedule.

With public entertainment decimated since last March, Antrim and Newtownabbey Borough Council are currently looking at options for the months ahead and will discuss the plans at this week’s full monthly meeting.

At the January council meeting it was agreed that the Council Events Programme for 2021 be implemented and kept under review and that regular updates be brought to future council meetings.

It has since been announced that there will be no May Fair in Ballyclare for the second year running.

The Steam Rally has also been cancelled and there will be changes to the Antrim Summer Festival.

Also in May, there will be the lighting of two beacons to celebrate the Centenary of Northern Ireland, which may be open to restricted numbers and streamed online.

Antrim Live will be incorporated into One Giant Weekend in September, which will also mark the Centenary.

Garden Show Ireland in June will not take place but will be promoted for 2022 during One Giant Weekend.

The Northern Ireland Pipe Band Championships at Antrim Castle Gardens in June has the option to be pushed back from June to later in the summer if required.

Schools out for Summer and Brighter Nights in Glengormley are continuing as normal at this stage, while the Civic Square in Mossley Mill could be used to accommodate 450 people, socially distanced, for ticketed theatre, comedy and music events at the outdoor stagem with the potential of online screening.

Party in the Park at Antrim Castle Gardens in August may be delivered, subject to restrictions, with the Shoreline Festival to be included as part of One Giant Weekend.

Spinning Yarns at Mossley Mill is still slated for September.

Halloween events are yet to be confirmed, while a decision on whether the Enchanted Winter Gardens event can take place at Antrim Castle Gardens in December, will be made in June.

Council has also agreed to organise ‘animation events’ in the town centres when restrictions permit.

Planning is underway to deliver artisan markets, street theatre, live music, animated trails, treasure hunts and busking as examples of activities which will create entertainment and atmosphere in all of our towns.

A proposal has also been received from a Big Wheel operator to display at Antrim Market Square from April 30 to June, 27 open daily 12 noon to 9pm and at Jordanstown Loughshore Park for mid-August to end September, open daily 12noon to 9pm, with the addition of a Panoramic Park of mini attractions in the bowl area.

The operator would pay a daily hire fee of £100 to the council for the duration of hire periods for both the Wheel and the Panoramic Park and take on full responsibility for operation and management of the attractions.

Council officers said that big wheels are designated as Outdoor Visitor Attractions under COVID regulations and so can operate when restrictions permit this sector to open.

The operator will supply COVID-19 Risk Assessments, insurance and has committed to robust COVID safety measures.

In terms of community and other events, the organisers of the May Day Steam Rally planned for May 2 and 3 is cancelled, however they are investigating the possibility of running the event at Shanes Castle over the last weekend in August.

The Irish Game Fair and Food Festival is scheduled for 26 and 27 June in Shane’s Castle and is being supported by Council funding of £15,000 from the Economic Development budget.

The ISPS Handa World Golf Invitational 2021 is planned from July 27 to 1 August 1 with sponsorship support from the council.

A week long programme is traditionally delivered by the Antrim Festival Group in June, culminating in an outdoor event on the final Sunday in Antrim Castle Gardens.

Organisers have indicated that they think this is not feasible and they require a longer lead in time so they have proposed running two family day outdoor music events in Antrim Castle Gardens and Market Square.

The first would take place alongside Party in the Park on Sunday August 8 and a second on Sunday September 5 as part of One Giant Weekend.

Officers said there is an opportunity for the Saturday event infrastructure to be used by the Festival Group on both dates which reduces their cost.

An application for funding support of £5,000 from the Community Festival Fund has been submitted and will be assessed and presented to the April Community Planning Committee25

The Randox Antrim Agricultural Show is scheduled for Saturday July 24 in Shane’s Castle, however to date no application for council funding has been submitted for this event

Officers proposed that the updated Events Programme be approved and that the proposal to operate a Panoramic Wheel in both Antrim Market Square and Jordanstown Loughshore Park from April to September as outlined, be approved

It was also proposed that monthly regular updates on the Events Programme be presented to the council and that any budget from events that do not proceed, be directed to the Town Centre and Villages Recovery programme