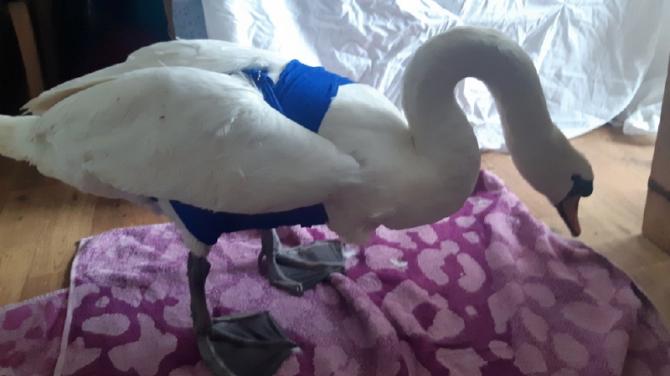 IT is a distressing image, but the photograph of a swan frantically trying to clean a gaping wound after a dog attack is becoming a cruel fact of life at Antrim Lough Shore.

It is just the latest incident of birds being attacked by dogs allowed to run free off the lead at the local beautyspot.

Fiona Brown was quickly on the scene last Monday - which was just as well, as the dog and its owner darted away.

“I can’t believe that whoever let their dog do this, didn’t even have the decency to call for help for the swan,” she said.

“When we saw him like this, he was literally standing in a pool of blood trying his best to clean himself.

“It’s simply not acceptable and time to protect these birds. Sadly, irresponsible dog owners will ruin the freedoms for everyone.”

The incident was reported to Debbie Dolittle’s Wild Life, who have been rescuing native wildlife from swans and birds of prey, to badgers and foxes since 1984.

It was not the first time that they have had to race to an emergency at the popular walking spot. And they were angry.

“This needs to stop. Antrim Lough Shore yet again,” they told their 20,000 followers on social media.

“[The swan was] grabbed by a dog and has a huge wound on its belly which was bleeding badly..

“Its all been cleaned, bleeding stopped and the wound closed up now.

“This guy will be taking up quite a bit of time over the next 48 to 72 hours.

“Why are people still allowed to walk round here? When will people learn?”

By Tuesday the bird appeared to be recovering from the ordeal.

“The bleeding has all stopped and the wound is being daily dressed.

“There sadly wasn’t enough skin left to sew up the opening, so the wound will be naturally left to heal over with assistance from medications and medicated dressings.

“The wound has been packed with Activon which is medical grade manuka honey and is a wonder of medical science. It has super healing properties and brilliant at keeping wounds clean of infections.

“For now he will be confined to give the wound a chance to heal without him banging about or getting it wet and dirty.

“But he is alert, eating and drinking and fighting his injuries.

“Also, the council are currently erecting a temporary fence around the yellow box off the slipway. And I have also been informed they have fenced off an area at a nest along the path as the pair have been tormented by people and dogs passing.

“Thank you to the council for getting these measures in place so quickly.

“Hopefully a more permanent solution can be put in place before a similar incident occurs in the future.”