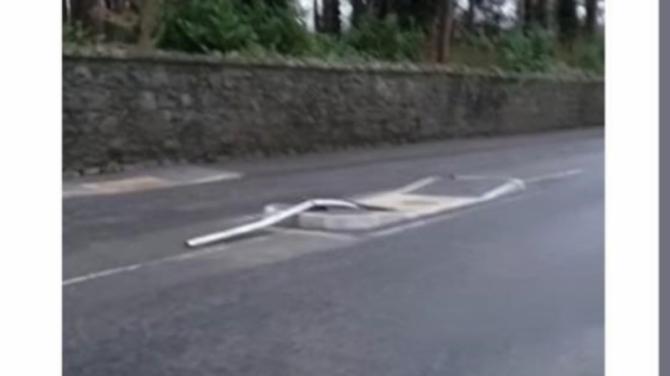 A MOTORIST has said that new traffic islands in Randalstown were not properly highlighted to drivers immediately after being installed, leading to a number of accidents in the town.

The commuter was one of a series of drivers who hit one of the new road safety measures on the morning after St Patrick’s Day, and complained that there was no obvious warning that there was a new structure in the middle of the road.

He said that his own car sustained £1,500 of damage, that vehicles in front of and behind him also made contact with the island and that he helped change the wheel on a car of an NHS nurse who was late for her shift at Antrim Area Hospital after also crashing into it.

The man has alleged that workmen left the site early because of St Patrick’s Day, without erecting suitable warning signs or other markets.

While local councillors have urged drivers to slow down and be more observant, the man said that he is an advanced driver with a ‘blue light’ licence, who hasn’t had an accident in 20 years.

“There were, five, possibly six cars that went into it, while I was waiting for a recovery vehicle, so we can’t all have been speeding or not looking where we were going.

“You’re coming over a bridge, you are trying to keep right, away from the cars parked outside Shane’s Street, and then there’s a traffic island in front of you, with no bollards, cones, high visibility warnings, nothing, and your front wheel is wrecked.

“The car that hit it first seemed to be a small one, and went right over the post in the middle, the oil sump had been bust and it was completely wrecked.

“The woman who hit it, two cars after mine, I changed her wheel. She was a nurse working in Antrim Area Hospital.

“Luckily a local business provided me with CCTV and it shows there was literally nothing else I could have done.

“I’ve been past since and there are wheeltrims and hubcaps and wrecked wheels sitting lying, so it’s obviously a big problem.

“It’s a hazard that didn’t need to happen and speaking to people in Randalstown, nobody seems to know who asked for them and work is still going on to try and make them more apparent.

“These things need big neon flashing signs and markers, not to be put up on St Patrick’s Day with no announcement or warning and then take out loads of cars.”

Police were called to the scene on the morning of March 18 and more visibility measures have since been installed around and approaching the islands.

However one local councillor has been scathing about motorists who have connected with the island is Glenn Finlay of Alliance, who blasted: “If you can’t spot a concrete island in the middle of the road, with two big reflective bollards, a big reflective lollypop sign and 500 yards of approach markings then you need to get yourself off the road pronto.

“Whether that's from poor eyesight, lack of concentration, speeding or tiredness, you've got to go. Seriously, look at yourself.These islands have become the perfect example of the truly atrocious driving habits of people on their morning commute.

“People have been witnessing it for years and now, thanks to these islands, we have the physical proof in the space of a week to prove it.

“Hopefully Mr Magoo puts his licence back in the luckybag by the time the kids go back to school.”