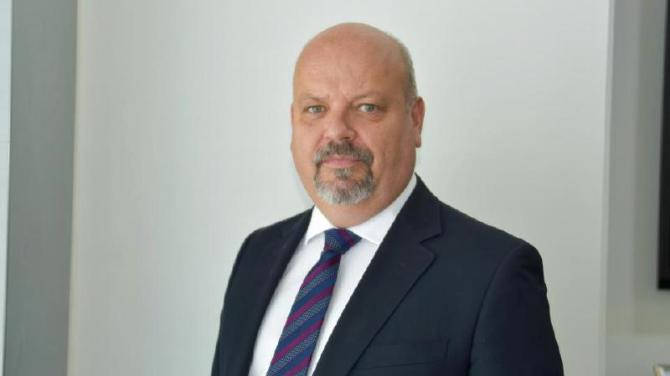 AN Antrim businessman says he wants to inspire young people from the town after reaching the top in his own chosen career.

Derrick Maguire (55) is originally from the Dublin Road area and is a former pupil of Antrim Primary and Antrim Grammar.

He now heads up a real estate company on the island of Malta after living and working in London and Dubai.

Derrick and wife Debbie now live in Marsaskala on the island (pictured below).

He said that despite the uncertainty over the future among some young people after their educations were disrupted by the pandemic, he is living proof that you can do anything if you set your mind to it.

“My mummy still lives in Cedarmount and my dad was Reggie Maguire of Bairds of Antrim fame, who sadly passed away eight years ago,” said Derrick.

“I just want to tell young people that you do not need a degree to be successful.

“Bearing in mind what COVID has done to the young generation at school, I though I could uplift their spirits with my story.

“Life is a journey and I think mine has been very interesting and challenging, but through sheer determination and a will to be the best I have succeeded in a world of real estate where my accent and country of birth was not seen as being positive.

“In Antrim we are very proud of our two snooker players conquering the world - I am a guy from Antrim trying to conquer the world in my industry!”

Derrick originally left home at the age of 19 to go and live and work in Scotland for 20 years.

“Being Entrepreneurial, very competitive and seeing opportunity where others do not, is something I excel at in business.” he said.

“I had to do this for myself for 15 years when I was self-employed and running my own businesses.

“All of the drive and determination was driven by a vision, which was mapped out and planned.”

Having lived in 12 countries in 25 years, Derrick Maguire moved to Malta from London to take up the CEO role of Luxfair Real Estate in October 2019.

In his more than 30 years of working in the industry he has worked for Belvoir and The Property Franchise Group in the UK, as well Asteco PM LLC in Dubai.

He was also Head of international for Chestertons in London, a role for which he was head-hunted from Asteco in Dubai.

At Chestertons he helped set up the franchise model for the company to grow out of London, which morphed into Luxfair Realty.

Derrick’s speciality is franchising, and he had to build Luxfair Real Estate from scratch then launch franchising and is now in charge of multiple locations.

The result was seven franchisees signed within 12 months – all while the island was under COVID restrictions.

“Another three are in the pipeline locally and will launch within the next six to nine months, plus I have International enquiries in Ireland, Jordan and Dubai.” he said

“All of this was carried out using the proven formula I have always used in life – build relations, explore opportunities, agree a mutually beneficial path to success then close the deal.”

Speaking to a Maltese publication about the move, he said: “It is very challenging here.

“But I am starting to win the battle and bring excellent customer service to the clients.

“I am also carrying out enhanced training to keep the momentum going as well as supporting the staff/franchisees at all times.”

Maguire planned to move before the pandemic and relocated his family just for the role.

“I moved from Head of International at Chestertons to take this job in Malta with Luxfair.

“Many things attracted me – the package I was offered, the challenge to build up from nothing, a brand, being given full authority to mould the franchise and build it up”

“I also saw a huge opportunity to bring increased service levels and customer service to Malta.

“Plus, there was a place for a local company with an international reach.

“Finally, how could I say no to living in this beautiful country, with perfect weather, sea close by, an affordable lifestyle and speak English!”

When asked the most significant challenges he faced regarding relocating amid a pandemic, while also adapting to a ‘new work normal’, Maguire replied: “The way of doing business in Malta is truly unique compared to other countries I have worked.

“I was used to the UK way and Dubai way, which meant completion happened very quickly compared to the slower Maltese way.”

Derrick is now in demand as a writer and columnist and he appears on videos for a new property portal as well as providing training experiences.