Antrim priest does 77 squats daily for seven days - to help raise over £7700! 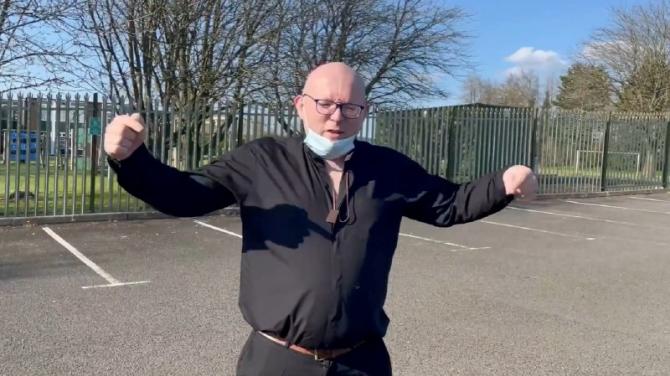 AN Antrim priest who recently battled COVID-19 has completed a massive fitness challenge in aid of charity.

Just months ago Father James O’Reilly from the Parish of Antrim was fighting the coronavirus.

He had previously warned local people to take the illness seriously and exercise caution after being repeatedly being called to Antrim Area Hospital to minister to seriously ill people in the last hours of their life.

Now the big-hearted clergyman has pulled out all the stops for a colleague who’s wife died of cancer earlier this year, by completing 77 squats each day, for seven days.

Father O’Reilly filmed his feat and posted each day on Facebook, challenging other people to do their own week-long set of exercises.

He accompanied his daily travails - carried out indoors and outdoors, come rain or shine - with motivational messages and his videos often starred cameos from young supporters.

Donations poured in and helped smash the £5,000 barrier set by Father O’Reilly’s colleague Vinty Firth, who was raising money in memory of his late wife Anita, who passed away from cancer in February.

Mr Firth, who takes care of the couple’s two young daughters, will also be taking part in the Cancer Focus Mourne Seven Summit Challenge this summer and over £7,700 has already been raised.

In 2019 Cancer Focus Northern Ireland celebrated 50 years of working to reduce the impact of cancer on local people’s lives.

The charity provides care and support services for cancer patients and their families; offers a range of cancer prevention programmes to help people lessen their risk of getting cancer; funds scientific research into the causes and treatment of the disease and campaigns for better health policies.

Most of their work is funded through donations.

Mr Firth’s fundraising page reads: “Nothing will ever prepare you for hearing the words, ‘you have cancer’.

“It’s like a loud gunshot going off in your mind, sending you into complete shock as your life as you knew it shatters into pieces.

“Three simple words that have the power to alter your life.

“I remember Anita’s face as she smiled at the consultant with that big beautiful smile of hers and proceeded to ask for the prognosis.

“Being told you’ve a year to live, at most, would send anyone into distress, but strength, courage and blind belief rose up from her very being as she declared that God had already won the battle and He can and will heal her.

“I was bowled over by her faith.

“We got brought into a side room.

“A room that I’m sure had seen many, many tears over the years.

“We cried and prayed. Clinging to each other in fear but our hearts clinging to the hope we had in God.

“It’s in this room we realised we didn’t have to do this on our own, there were organisations and charities to help us in all aspects of our cancer journey.

“It was a lot to take in, but we were so thankful to know we didn’t have to do it alone.

“This is why I’m completing the Cancer Focus Mourne Seven Summit Challenge, in June.

“As a family we want to make sure other families in their time of greatest need can be met with the same love and access to resources that we were afforded.

“We never thought we would be the ones getting that news.

“When it’s you, when you’re needing the help you’re so thankful for every individual that decided to support that charity.

“It makes all the difference.

“Please join us in making a difference for families who will be faced with a cancer diagnosis this coming year.”