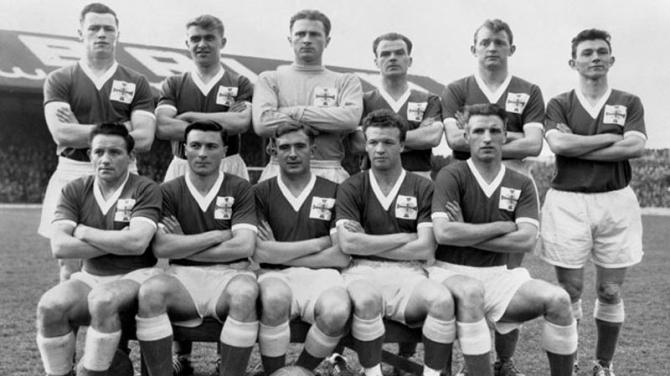 AS Northern Ireland’s football squad prepares to begin its 2022 World Cup Campaign in Italy at the end of the month, one Randalstown man’s eyes will be firmly set on the team’s campaign from more than 60 years ago!

Eighty-eight-year-old Billy Hunter was one of a handful of fans who travelled to Malmo in Sweden for one of Northern Ireland’s most successful World Cup campaigns and he is hoping to mark the occasion by returning to Malmo with his daughters this autumn.

It was in the spring of 1958 when the then twenty-six year-old baker decided to follow his team to Sweden.

“As a young man, I played football myself,” said Billy. “But I was never going to be a top-class player – I was too small and light, and too easily hurt!

“I’d joined the Boys’ Brigade as a boy and I played on its football team.

“I wasn’t bad – in fact, I was the only player who was transferred to 3rd Bangor BB and then I worked my way up to the 21st Belfast BB.

“I used to travel every Saturday morning on the bus to play and then I joined the Army Cadets. In 1946, I played at outside right for their team against Wales.”

Billy was a baker by trade and moved around a lot. His longest job was the two years he spent at the Inglis factory in Eliza Street in Belfast’s Markets area, making pancakes, soda and potato bread and snowballs.

“Ninety per cent of the workers were girl - hence my reason for working there the longest!” he laughed.’

A lifelong Northern Ireland fan, Billy was delighted when the team qualified for the 1958 World Cup finals and so he decided to travel over as a spectator.

Since he’d known that the World Cup was coming up, Billy had been saving for two months and had raised the princely sum of £200 - around £2,000 in today’s money – so he had enough to stay for a fortnight.

“I just wanted to get to Malmo for the opening round. I travelled to Liverpool, then took the train to Dover and then the boat to Ostend, another boat to Skattegat and then to Malmo.

On the boat to Liverpool, Billy had met up with Stanley Mahood and Ian Malcolmson – both of whom played for Coleraine – and got into conversation with them.

When the three arrived in Malmo, they headed for the Irish team hotel.

The Mayor of Belfast – Alderman Cecil McKee – who was already at the hotel with the team, thought it was brilliant that the men had taken the trouble to travel so far and insisted that they stay in the hotel at the expense of the Irish Football Association.

“Mikey McColgan and Davey Nicholl had set up a tent in the grounds of the hotel and we thought we’d be staying there, so this was a nice surprise.

“Needless to say, it didn’t take us long to settle in! We were treated like kings.

“On the first night, for example, there was a long table laid out with every type of food you could imagine.

“We were spoilt for choice and were licking our lips.

“The next minute we were sharing our tea with seventeen players and twelve assistants. It was a dream come true!

“I filled my plate to the brim. It was only later I realised that this was just the starter!

“I thought to myself that I could live here rightly. Perhaps unsurprisingly the table was cleared.”

Billy was to spend the next two weeks in the company of the team, observing training sessions and dining with them afterwards.

It was during one of the training sessions that Billy was to witness an innovative tactic!

‘Danny Blanchflower had got a free kick just inside his own half.

“Peter McParland was standing on the corner of the eighteen-yard box tying his laces, letting on that he wasn’t involved in the free kick at all.

“All of the other players were marking each other, but Peter just stood outside of it all. As soon as Blanchflower went to take the free kick, Peter started running towards the corner of the box. Blanchflower had kicked it at head height and Peter headed it like a bullet past the goalkeeper. It was amazing to watch.”

One of the Northern Ireland players at the time was Manchester United’s goalkeeper, Harry Gregg.

“I really felt for Harry. The Munich plane disaster had only happened in February of that year – just four months before the finals - and so Harry shared a room with one of the trainers, Gerry Morgan.

“Harry was still having nightmares about the disaster and so the team was having a religious service before each match.

“There was no ‘green’ or ‘orange’ about the team or about the service, it was just done Swedish style. The whole team just knitted.”

The 1958 World Cup finals marked a special moment for the teams of the British Isles, since it was the first – and indeed only – time that England, Scotland, Wales and Northern Ireland had all qualified for the same championship.

In a tournament that was to witness the début of a small, swift striker from Brazil named Pele and France’s Just Fontaine score a ground-breaking thirteen goals, Northern Ireland’s chances were not considered to be high.

In footballing terms, the Northern Ireland team of 1958 wasn’t as good as other teams technically, but in terms of work rate, as Billy says, ‘they would have died for each other’.

That camaraderie was going to be sorely needed, in light of the fact that Northern Ireland were in a ‘group of death’ – one which featured Argentina, West Germany and Czechoslovakia – a formidable combination.

To put it mildly, the team’s chances of emerging victorious from the group were slim…..

Fortunately for the team, however, they had most of the opening venue of Halmstad cheering for them! That was down to a local Swedish boy named Bengt Jonasson, who had been acting as a runner for the team, passing on messages within the camp and translating for Gerry Morgan.

The team’s affection for Jonasson was such that he actually referred to Morgan as ‘Uncle Gerry’, but the affection was reciprocal and Jonasson had whipped up support for the team among the locals.

When the team stepped out in their opening match against Czechoslovakia, most of the crowd was cheering the team on.

Spurred on by the home fans – and to everyone’s amazement - Northern Ireland beat the Czechs 1-0, with Derek Dougan and Harry Gregg playing starring roles.

The team’s luck was to run out in the follow-up match, losing 3-1 to Argentina, but things improved again in the third match, with the team managing a very respectable 2-2 draw with West Germany – one of the goals a repeat performance of the tactic Billy had seen Danny Blanchflower and Peter McPartland practise in training!

Northern Ireland’s draw with the Germans meant that they would face Czechoslovakia once more in the play-offs.

This time they couldn’t rely on the massive support they’d enjoyed in the first match, since the play-off was to be held in Malmo, more than 100 miles from Halmstad, but, again, to everyone’s amazement, the team overpowered the Czechs by 2-1.

“It was absolutely amazing that Northern Ireland were able to beat a powerful team like Czechoslovakia, particularly because the team had only been able to afford to take seventeen players for the tournament.

“Five had to be left behind because the FIA couldn’t afford to take them, so the manager didn’t have a big pool to choose from.

“The team was absolutely racked by injuries by the time they got through to the quarter finals.”

Billy had booked two weeks’ holidays for the first round of the finals as he – like everyone else – didn’t expect the team to progress to the quarter finals.

“I was ready to come home, primarily because I hadn’t saved enough money for more than two weeks.

“When I told the guys that I was going home, however, the players and officials had a whip round and gave me the money so that I could stay for the extra week in the hotel.’

Unfortunately, Northern Ireland lost 4-0 to France in the quarter finals and so the team had to return home.

“In years to come, when we reflect with the judgment and enchantment that distance leads to these things, we may marvel at the most impossible feats we achieved,” he said.

Billy returned to the Inglis factory on the Monday morning and was left to face the foreman, Dan Magee, about the fact that he was only supposed to have taken two weeks’ holiday. Billy asked Dan if he could have his ‘cards’ ready for him for 5pm.

“I’d no fear about walking away from the job,” said Billy.

“After all, I was single and unattached and so I’d no issues with not having a job. I’d lived the dream by travelling to Sweden and spending time with the team.

“When you’ve been in heaven, it’s very hard to come back to hell.”

Billy is hoping to return to ‘heaven’ this year – pandemic allowing – accompanied by daughters – Jane McTaggart, owner of Blonds Salon in Randalstown and her sister Judith .

“We’re not sure if we’ll be able to go just yet due to the coronavirus,” said Jane,

“But we’re hoping to take Dad over to reminisce.

“That trip to Sweden – and the time he spent with the team – is one of the highlights of his life, and we’d love to let him relive all of those memories.”