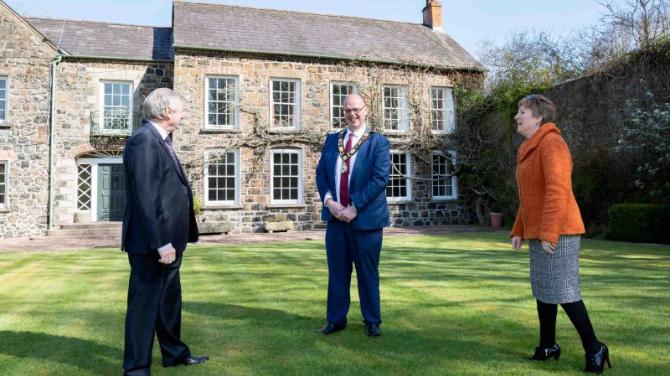 WITH lockdown in full swing and hospitality closed to the public, there was nothing much else for hoteliers Catherine and Eugene McKeever to do but get busy in the garden.

The couple, who along with their children run an eponymous hotel chain, added the historic Dunadry Inn to their portfolio in 2017 and completed a multi-million pound refurbishment.

Built on the site of an ancient fort and once home to both paper and linen mills, the Dunadry was first launched as a hotel by the Falloon family in 1966, followed by the Mooney Group in 1986.

While the couple knew the property was steeped in history, with the paper mill alone dating back to the 1670s, they were astonished, on clearing shrubbery and trees facing the Six Mile Water, to find a new section of wall and an island, with the mill race flowing around it.

The green-fingered McKeevers have now restored the once-hidden gem and hope it can be a new focal point for weddings and a place for guests to relax by the riverside.

They have planted a new beech hedge and added a beautifully manicured lawn, as well as other landscaping.

“It was completely overgrown, we didn’t know this part of the grounds really even existed,” explained Catherine.

“It’s opened up a whole new view of the river and it is so tranquil.

“There’s even another bridge to the far side of the river, which we didn’t know was there either.”

Indeed the McKeevers own parts of the riverbank and plan to now revamp the far side with a walkway and more facilities for fishing enthusiasts.

Yet another new asset is Watermill House, which was occupied by the late Margaret Mooney, matriarch of the family which sold the hotel to the McKeevers four years ago.

She lived out her days in the imposing property in the hotel grounds, which is surrounded by a beautiful walled garden, before her passing a year ago.

Eugene and Catherine’s daughter Bridgene explained: “The house and adjacent cottage are really beautiful and have lots of potential in terms of self contained, self catering accommodation - for instance, we can visualise how the bridal party and families could each have their own space and then come down to the lawn or the new island area for a beautiful outdoor ceremony.”

As part of ongoing expansion plans, the McKeevers are also running apprenticeship schemes, working alongside industry accreditation bodies and further and higher education providers to ensure that young people can progress to degree level whilst practically learning the trade.

Bridgene’s brother Eddie added: “This is a family group and we have high rates of staff retention, with many of our employees staying with us for years.

“Because of that good relationship and our reputation for training and investing in our staff, we are getting a lot of people applying for jobs and showing interest in apprenticeships through word of mouth.

“It is gratifying that younger generations of people want to work with us because of positive experiences among their families and friends.”

Still very much hands on, Eugene McKeever himself started working part-time at Corr’s Corner at the tender age of 12, working his way up through the industry before being offered the chance to buy the roadhouse as an adult in 1993, which he then turned into a hotel.

The group now boasts five properties, including the Dunsilly in Antrim and Adair Arms in Ballymena.

Mayor of Antrim Jim Montgomery, who called in to visit the new ‘secret garden’ last week said: “As we move out of lockdown, I congratulate the McKeevers on their dedication and hard work to tranform this area of the historic hotel.

“I very much hope it will be a huge success and I can see myself sitting beside the river with a good book very soon!”