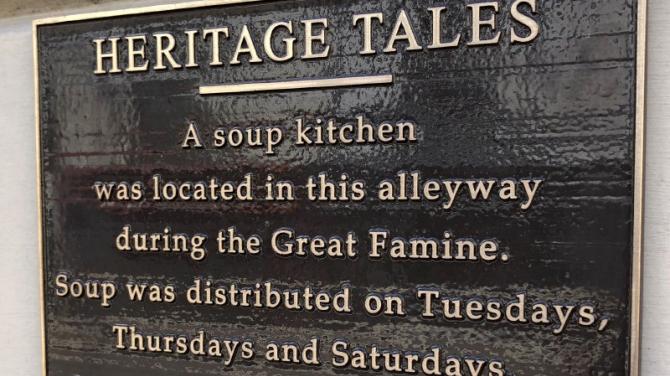 RANDALSTOWN residents may have noticed something new in the town recently in the form of bronze plaques positioned at fifteen different locations, each introducing a ‘Heritage Tale’ associated with that site.

The plaques were the idea of Tidy Randalstown, who were successful in bidding for £8,500 from the Lottery Community Heritage Fund.

The funding round was aimed at supporting small-scale projects to help connect communities to the heritage in their local area.

Tidy Randalstown worked in collaboration with Randalstown Historical Society and the ARCHES association to deliver the project.

While each high-quality plaque, cast in bronze, tells a story in outline, a qr code, located alongside the plaque, can be scanned with a mobile phone to access a more detailed account, researched and written by the Historical Society, on pages hosted on ARCHES’ website.

A map suggesting a recommended walking trail covering all the plaques has been produced and is being made available at various local locations.

The Heritage Tales include the story of Alex Woods, champion boxer in the 1940s, who lived at 66 Main Street.

A plaque at the entrance to the Parish Centre, on Station Road, explains that this was the site of Millmount House, home to successive agents of the O’Neill estate for over 100 years, while the more detailed web information accessed via the qr code provides an account of how the Youngs, the last family to occupy the house as agents, played an important role in the aftermath of the tragic death of a young army officer, Lieutenant Christopher Cookson, who drowned in the River Maine while on a fishing outing in the O’Neill estate in 1909.

Other plaques draw attention to the site of a soup kitchen which operated during the Great Famine, the first National School, and the childhood home of media pioneer Brian Waddell.

“Although Tidy Randalstown is best known for tending to plants and litter-picking, our vision also encompasses preserving our heritage and building community, and we feel that the Heritage Tales project is very much in keeping with that vision,” she said.

“We hope the plaques will preserve memories, spark conversation and heighten the community’s sense of pride in what can be achieved.

“The project has also strengthened our links with the Historical Society and Arches, both of whose contributions were essential to its successful completion.

“We hope that locals and visitors alike will enjoy following the trail of the Heritage Tales and discovering some lesser-known nuggets of Randalstown’s history.”

Further information on the project and links to all the Heritage Tales can be found at https://randalstownarches.com/