Local lads' love letter to Antrim is taking the internet by storm! 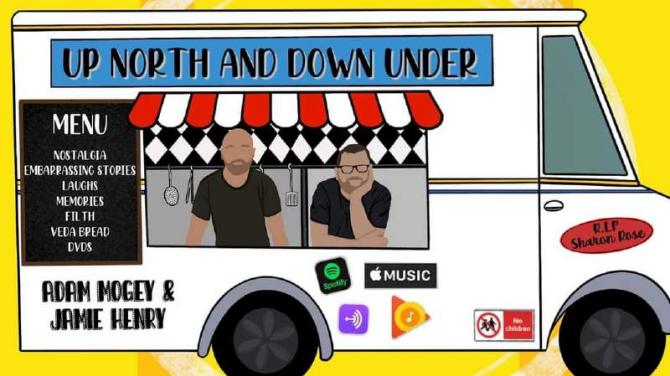 THOUGH they may be living on opposite sides of the world, two life-long friends have joined forces to broadcast an irreverent tribute to the town they love so well.

James ‘Jamie’ Henry and Adam Mogey have a lot in common. Both are 32 and both are Antrim born and bred - and are proud of it!

“We met back in the day at Antrim Primary where we immediately hit it off,” said Jamie.

“Over the years we became inseparable and spent most days together as Adam’s granny lived two streets down from me in Newpark.

“We shared a love of football, movies and music, and we I suppose we became Antrim’s version of ‘The Inbetweeners’ as we got older getting into all sorts of scrapes - many of them hilarious!”

But nothing lasts forever, and in 2010 Jamie dropped a bombshell.

“I broke Adam’s heart by going to Australia for a year of travel after graduating from Coleraine University.

“When I got there I met a woman and ended up staying for good. I have since been married, had a child and been divorced - but Adam and I still talk at least once a day.”

Many of those conversations inevitably led them down memory lane to the ‘good old days’ of people and places that shaped their lives - like rowdy nights in the Bailiwick or queuing for chips and massive fish at the Sharon Rose.

And then the Eureka moment. They decided to save these stories for posterity by putting them on a podcast entitled Up North and Down Under - and it has quickly become something of a cult favourite in Antrim.

“We talk about anything and everything, recalling funny situation and some of the characters that we grew up with.

“It has been a great laugh and ee have had a great response and want to keep continuing.

“We have had many ups and down and still are able to help each other through it with our humour and ability to laugh at ourselves.

“The podcast helps us keep in touch, it gives people a laugh and in turn it has helped lots with my homesickness and got us back in touch with old friends.”

So what do they find to talk about?

“We talk about the old haunts like the Deerpark, the Bailiwick, primary school days, the annual summer scheme and the Antrim Forum.

“There are also some good, old-fashioned slaggings, embarrassing tales and memories of the colourful characters of the town, and lots more.

“Every episode follows a topic with the most recent being ‘clubbing’ where we reminisce on our first nights out in Maddens and when our parents would have met in the Deerpark.”

It all has a distinctly local flavour - and the lads would not have it any other way.

“We are both Antrim boys and are proud of it,” said Jamie.

“Our podcast is very much a nod to the town and we talk about many things attached to Antrim over the years.

“It has proven very popular with thousands of listens on each episode and a growing following on social media.

“It’s a mix of humour and nostalgia - which is just what we need after the last year.

“But there are a lot more stories to tell, and we would love to welcome more local people aboard.

“Join in, give us a listen and remember what makes Antrim such a special place to live.”

Up North and Down Under is available to download on Spotify, Apple Music and many other platforms.