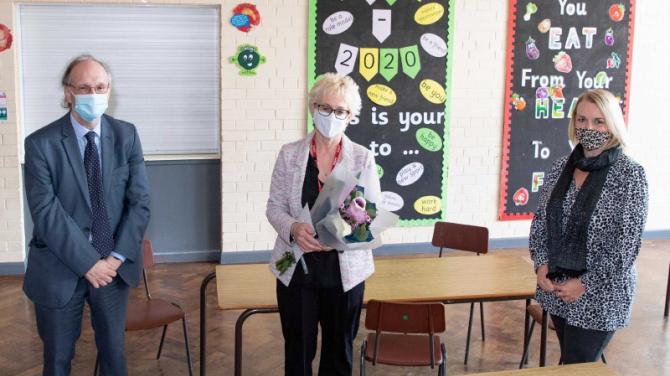 THE Education Minister has visited Ballycraigy Primary School, months after the alarm was raised in the Antrim Guardian about the crumbling state of some of the building infrastructure.

Earlier this year the Guardian highlighted how parents, teachers and public representatives were concerned that parts of the school was crumbling, with window frames rotting and the facade decaying.

And it is not alone.

South Antrim DUP MLA, Trevor Clarke, hosted a meeting on Friday at Randalstown Central Primary School with senior figures from the Education Authority - after it was revealed that some of the original windows from 1936 remain in place.

A number of improvements have now been promised.

Commenting after the visit, Trevor Clarke said: “As the only controlled primary school in the town it is vital that the building is maintained to a good standard and continues to attract new pupils each year.

“I must place on record my admiration for the principal, Mr Charlwood, and building supervisor, Mr Luke, as the school, despite its age, provides such a rich learning environment for all of its pupils.

“That said, the school has a number of issues that have arisen due to a lack of effective maintenance and permanent repairs.

“Following our meeting today, I am glad that the Education Authority have identified the areas of concern and have agreed to carry out a scheme to repair and replace the affected flat roofing and portions of guttering.

“It was also agreed that repairs would be carried out in the near future to ensure the building remains a safe environment for all pupils and staff, paying particular attention to the outdoor play area and wooden window frames.”

**For the full story about Ballycraigy Primary School, see Page 6**