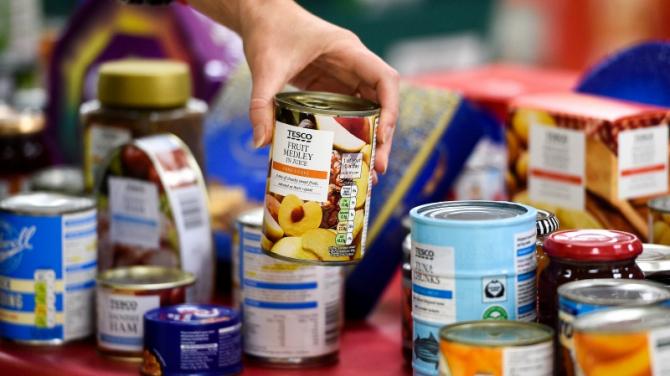 DEMAND for emergency food parcels from Antrim Foodbank soared by more than 40 per cent since the start of the pandemic, shocking new figures have revealed.

Over the last 12 months the dedicated team of volunteers collected and distributed a staggering 21 tonnes of food.

Antrim Foodbank was seeded by the Trussell Trust, and they have recorded a sharp increase in ‘extreme poverty’. Users, they say, have on average just £248 a month to survive on after housing costs.

This week Antrim Foodbank is backing calls for government at all levels to commit to working to end the need for their services for good.

It coincides with the publication of a hard-hitting report by the Trussell Trust, entitled ‘State of Hunger 2021’.

Commissioned by the charity and conducted by Heriot-Watt University, the study sheds light on the groups of people across the UK disproportionately affected by hunger and the drivers behind food bank use.

More than six in ten working-age people referred to a food bank in early 2020 were disabled - that’s more than three times the rate in the UK working-age population.

And single-parent families are more likely to be forced to a food bank with almost one in five (18 per cent) households referred to food banks during the pandemic being single parents - that’s more than twice the rate in the general population.

The charity says hunger isn’t about food - it’s about people not having enough money for the basics.

In fact, in early 2020 95 per cent of people referred to food banks in the Trussell Trust network were living in ‘destitution’ – this means people cannot afford to eat and stay warm and dry.

The main reason people had such low income was due to social security payments failing to cover the cost of living, according to the research. This was more often than not due to the design of the system, including issues such as the five-week wait for a first Universal Credit payment and low levels of payments.

Worryingly, the charity says people living in destitution risk being further pulled under by difficulties, such as debt and mental health issues. The research finds in mid-2020 nine in 10 households at food banks were in debt, while six in 10 had arrears on bills and owed money on loans.

People experiencing poor mental health referred to food banks in the network grew from around half in early 2020 to almost three quarters) in mid-2020.

With high rates of unemployment and redundancies, the charity says more people than ever are now likely to need the social security system to provide a lifeline to keep them afloat.

The charity says this should start with keeping the £20 increase to Universal Credit introduced during the pandemic but set to be removed in the autumn.

Fionnuala O'Donnell, Manager at Antrim Foodbank, said the situation appears to be deteriorating.

“Last year, food banks in the Trussell Trust network gave out a record 2.5 million emergency food parcels to people in crisis,” she said.

“At Antrim Foodbank, we gave out a shocking 1,227 of those, a 41 per cent increase on the previous year.

“No one should be forced to use a food bank because they can’t afford the essentials.”

“How can anyone in this country stay warm and dry and buy food on just £248 a month after rent?” she asked.

“People struggling in extreme poverty are pushed to the doors of food banks because they do not have enough money to survive.

“We know we can change this. We need to change the conversation around poverty and take action together. We need government at all levels to commit to ending the need for food banks once and for all and to develop a plan to do so.

“It’s time for government to make this a priority – to recognise that it must be an essential part of their levelling up agenda to work towards a hunger free future where we can all afford the basics.”

“This research by the Trussell Trust is deeply worrying with record food bank use showing that too many people have been pushed into hardship by the pandemic,” she said.

“We have to stand together as we pull through this pandemic and not leave people behind, forced to rely on food banks and handouts to keep going.

“That is an abject failure by Government and all of us. Food aid should be a one-off in the UK not a new form of charity.

“It is in this government’s gift to end hunger, but it warrants a concerted cross-government and cross-party action – a plan to end the need for food banks, delivered as an urgent priority.”

The Trussell Trust is urging the public to sign up to its Hunger Free Future movement www.trusselltrust.org/hungerfree to become part of a new conversation about how, together, we can end the need for food banks.