The Apprentice Boys and the centenary of Northern Ireland 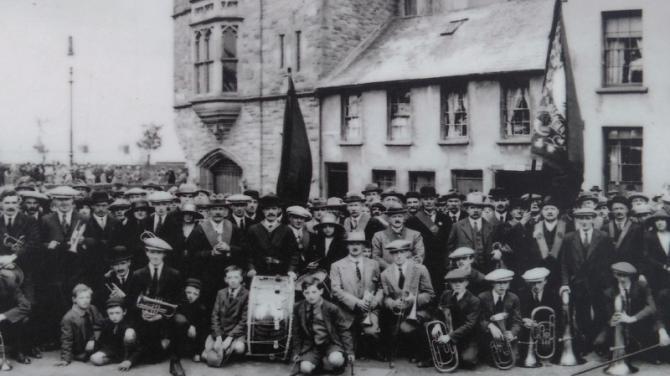 ON May 3 1921, the Government Of Ireland Act came into force, giving birth to Northern Ireland.

Our country has witnessed many tumultuous events over the past 100 years, however it has still managed to produce leading talents in many sectors, namely sport, music, drama and science.

The Loyal Institutions, especially the Apprentice Boys Of Derry, grew significantly in the years following the formation of Northern Ireland.

The Association continued to build upon the rapid growth it had experienced in the late 19th and early 20th centuries.

Throughout the 1920s and 1930s more and more Branch Clubs were formed throughout the new state of Northern Ireland. Sadly some have ceased to exist, but many still endure to this day.

In August 1923, 300 new candidates were initiated in the Apprentice Boys’ Memorial Hall and the Celebrations in Londonderry increased to a magnitude not seen until this point.

The following year, the number of Branch Clubs had increased to 31 and several hundred new candidates were once again initiated in the Memorial Hall.

In 1925, the first Amalgamated Committee was formed in Belfast to organise church services and parades in that area.

1927 saw the construction of the War Memorial at The Diamond and from this year onwards an Act Of Remembrance became a focal point of the August Celebrations.

The Baker Club was also revived causing the Association to expand further with a Baker Branch Club being established in Belfast’s Sandy Row shortly afterwards.

In the mid 1930s the Association began holding numerous Demonstrations throughout he country on Easter Monday to mark the commencement of siege hostilities on April 18 1689.

This tradition continues to this day, however the parade is held in one central location with each Amalgamated Committee taking turns every year.

The foundation stone for the extension of the Memorial Hall was laid by Lord Mayor of Londonderry, Captain JM Wilton, in 1936 and the newly extended Hall was opened the following year by Viscountess Craigavon.

The 250th Relief Celebrations in August 1939 were the largest in many years.

Belfast Browning Club had up to 500 Brethren parading, a number so great that they marched throughout the City with two bands!

The sermon in St Columb’s Cathedral was preached by Presbyterian Minister and Unionist MP for North Down, Dr James Little.

He said: “To all who are seeking in one way or another to undermine our state we send today this message from the historic walls of Derry that neither no politician nor terrorist will we ever consent to surrender any portion of the inheritance which God has entrusted to us.”

The Celebrations were cancelled by General Committee with the outbreak of the Second World War. August 1946 was the first Demonstration since before the war with a record number of 3,000 new candidates being initiated in the Memorial Hall in ceremonies which lasted from 9am until 5pm!

There were upwards of 7,000 Apprentice Boys and 90 bands on parade that day.

The late 1940s and early 1950s saw the number of new candidates being initiated pass the 1,000 mark on a yearly basis. This period also saw the formation of more Amalgamated Committees and in 1950 the Campsie Club was revived having fallen dormant in 1869.

It was also around this time that the Shutting Of The Gates Commemoration in December saw a significant increase in Brethren attending. Prior to this point the December Celebrations were attended only by the Parent Clubs along with representatives of a few Branch Clubs, however this was slowly beginning to change.

In the 1950s and 1960s, the Association had reached it's peak. Until the mid-50s it was common for the Orange Order and Royal Black Institution to take part in the August Celebrations.

On August 15 1962, the Londonderry Sentinel reported: ‘The parade was so great that it filled the entire two and a half miles along the processional route from The Diamond, via Carlisle Road, Craigavon Bridge, Duke Street... The last contingents had not left The Diamond when the head of the procession had returned and was passing through The Diamond to the Walls’.

Everything changed in August 1969. when ferocious rioting broke out. Although this was nothing new, as in the few years following the formation of Northern Ireland Republicans had instigated violent disorder in Londonderry, particularly during and after Apprentice Boys marches.

The riots of 1969 caused the Northern Ireland government to ban the parades in Londonderry, which is why the Celebrations could not take place in 1970 and 1971. However, services were still held in St Columb’s Cathedral and August 1971 saw a huge rally and parade take place in St Columb’s Park in the City’s Waterside.

In 1972 the government lifted the ban but the Celebrations were completely restricted to the Waterside.

In August 1975 the Association was permitted to march through the cityside once again, however much of the traditional route was severely curtailed which is regrettably still the case today.

It was also impossible to parade the Walls as the army had sealed them off to prevent Republican bomb attacks. However the Association was still going from strength to strength during this time, with a report book from 1971 stating that there were around 170 working Branch Clubs.

As Apprentice Boys, we are fiercely proud of Northern Ireland and how our country has come through decades of violence and adversity.

Northern Ireland is the cornerstone of the Union and we celebrate and take pride in our Britishness with more enthusiasm and gusto than anybody on the mainland. In fact it can be argued that we value our Britishness more than many in England.

In 2021 we still stand firm, unbowed and unbroken, as once again we find our Britishness and constitutional position within the United Kingdom under threat.

When our country was in its infancy many of our Brethren swelled the ranks of the USC and RUC and held the line against violent extremists who tried to force our country into bloody civil war.

During the more recent troubles, many of our Brethren were murdered in the service of their country by Republican terrorists.

As we look to the future with optimism and vigour, we also pause to reflect upon their sacrifice in defence of our British birthright.

As Loyalists, we treasure Northern Ireland’s position as an integral part of the United Kingdom and it is something of which we are extremely proud. Long may it continue!