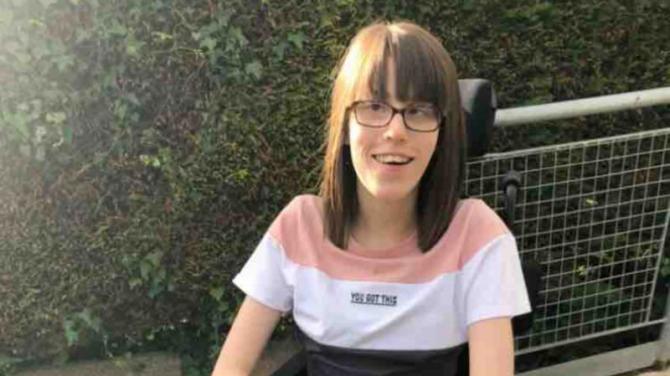 AN Antrim family has smashed their fundraising target after appealing for assistance to help a teenage girl ‘find her voice’ with a specialist piece of technology, thanks to the generosity of the Antrim public.

Her motor skills are impaired and she is reliant on her parents and carers in all aspects of everyday life.

Two years ago Madilyn underwent scoliosis surgery in London which left her very ill resulting in yet another condition called SMA syndrome.

While her general understanding is good, Madilyn can’t communicate back properly, her family are trying to the purchase an Eye Gaze, a specialised communication device which would enable Madilyn to communicate with others by solely using her eyes.

The operator looks at certain words or letters on a screen, which then translates to speech - meaning that the teenager can ask for assistance and communicate with her family, rather than them having to guess.

Mum Lynne explained: “Madilyn is wheelchair dependent and is non verbal although she has learnt a few words - ‘hiya’ being her favourite!

“Madilyn is 16 years old and is the most happy, friendly and sociable girl you can meet, despite the problems she has endured over the years.

“Despite all that, Madilyn is still smiling and we would like to make her smile even more by giving her the opportunity to make her own voice heard.”

“(The Eye Gaze) would enable Madilyn to finally have her say she can make choices, decisions and say whatever she feels which will give Madilyn a whole new world of independence.” said Lynne.

“We always say that there’s a story behind Madilyn’s eyes and by getting this for Madilyn we might just find out.

The Antrim community has already assisted the family in the past by raising funds to help purchase a specially modified bed for Madilyn, who goes to Riverside School.

Now they have helped smash through the £4000 barrier just over a week since a fundraising page was set up.

Local people have rallied round, contributing cash individually, through businesses and via charities such as Links2Pink.

The family says that any extra funds will be donated to equally good causes.

To donate, go to https://www.gofundme.