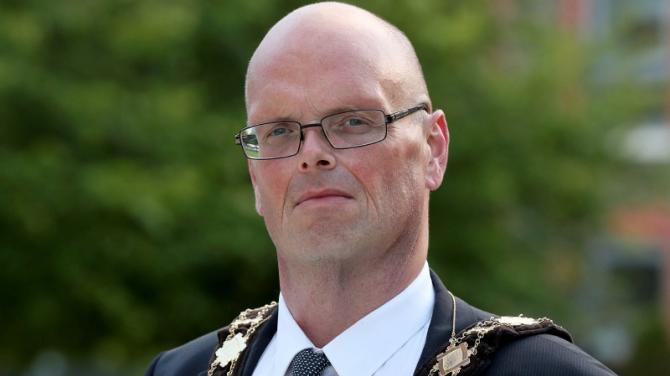 AS he prepares to hand over the chain of office to Alliance rep Billy Webb tonight (Tuesday), Ulster Unionist Jim Montgomery has reflected on a rewarding yet challenging term as Mayor.

Obviously he took the reins in a very different year. During lockdowns his ability to engage with people was inevitably curtailed.

Nevertheless he still managed to find a way - and he was both ‘moved and inspired’ by the community response to the pandemic.

“COVID has a major impact on all of us as we know. The traditional ways of interacting with people was well and truly out the window,” said the Antrim Town rep.

“The pandemic made it necessary to use modern technology and new ways of communicating and I used this to the maximum.

“We held the Christmas switch ons virtually and they were a huge success. This success allowed us to develop the Saturday Sessions which were a series of performances from local artists on our social media.

“Not only did this raise money for my charities but it allowed us to support some local artists and they entertained our community. Going forward our arts programme will be adapting to more performances online which opens up a whole new avenue for arts and culture.

“I created opportunities to interact with people throughout the Borough and further afield representing the council.

“One of the highlights of my term was hearing from people both in the community and in council about how they coped during the pandemic and what they did to help others.

“I was so impressed with hearing the experiences of these people and what is glaringly obvious is how the vast majority of the community came together supporting each other. Sadly there was some examples of people being uncaring and selfish but that does not detract from the great work and efforts made by the community at large.

“Part of my term was spent giving out certificates to people and businesses who went above and beyond in helping others during the pandemic. Every time I gave a certificate out I was heartened to hear of the good work that was being done.”

He also relished the opportunity to visit people and places he may not have otherwise.

“The role of Mayor was an honour and one I have enjoyed and will never forget.

“The Borough is diverse in some ways but united in others. I have travelled the length and breadth of it meeting people and working with businesses and community groups.

“There is so much work being done by community groups because there is such a high demand for services. I have seen many different areas of the community, from youth services to sports clubs, food support delivering to new businesses opening and existing businesses adapting.

“There is no doubt there are major challenges throughout the community and I have seen people and businesses rising to these challenges and adapting to the developing new norm.”

Were there any stand out moments?

“I only have good memories of my tenure. Seeing people look after others, coping from day to day, hearing their real life stories. Businesses changing and in many cases expanding.

“The borough is a nice place - a fact we often overlook. The Lough shore in Antrim is a lovely place now. I officially opened the Gateway Centre this week. We have a lovely area around there and there is further improvements to come.

“I visited many areas in Newtownabbey that I had never seen before and really enjoyed meeting the people and community groups who I was very impressed with.”

Another highlight was the opportunity to help good causes close to his heart.

“I was delighted and humbled to raise £24,000 for my chosen charities, Guide Dogs (NI) and Air Ambulance (NI).

“The practicalities of this is that the fundraising is providing guide dogs to two people. That will be life changing. It will also fund the essential Air Ambulance for two days, which is huge.

“That was achieved through the generosity of people and companies through donations and the auction I ran which was so generously organised free of charge by Wilson’s Auctions. So many individuals made donations and for all of it I am so grateful because it allowed me to make contributions to two special charities.”

He is also justifiably proud of how the council has planned to emerge from lockdown.

“Unlike some other councils we have not sat back to see what the world would be like after the pandemic.

“Along with the Chief Executive, officers and councillors I have spearheaded town centre regeneration. Locally as an Antrim councillor I am delighted by the announcement of Dobbies coming to The Junction and there are exciting and major improvements imminent to Antrim town centre. Other towns in the borough are changing with Antrim leading the way.

“There are other changes coming to the likes of Steeple Park, Antrim Forum and businesses in Antrim and wider afield which will greatly benefit the community as a whole. In all of this I have stuck by my principles and have not gone back on anything I have previously said or committed to.

“Antrim and Newtownabbey Borough is in a healthy position compared to some other areas. There were difficult decisions that had to be taken at the time but they will carry forward as benefits for us as a whole. I said at the start of my term I would not avoid making tough decisions just to be popular and I have stuck by that.

“I leave knowing I have done my best. I leave with my head held high.

“Finally I pay tribute to all the staff of the council. I have met many of them and I am so impressed and proud of their commitment to providing the best service possible to our community.”