People, memories and treasured heirlooms that shaped 100 years are to be celebrated 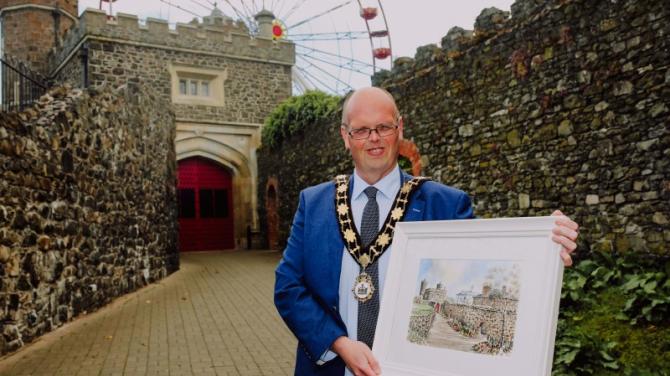 2021 is a hugely significant year in the history of the place we call home, marking 100 years since the formation of Northern Ireland.

The council are determined to mark that milestone - and they want the commemorations to be coloured by the people of Antrim and Newtownabbey.

They have unveiled an ambitious programme of events which will create a living history of the last century which will become a legacy for future generations.

Outgoing Mayor Jim Montgomery, who completes his term in office today (Tuesday), said he hoped locals from all backgrounds embraced the trail-blazing project.

“This year marks the end of a decade of centenaries which has been taking place since 2012, commemorating a succession of events that unfolded a century ago,” he said.

“These events and their impact redefined the island of Ireland and its people forever.

“Some of the significant centenaries marked to date include the signing of the Ulster Covenant, the Home Rule bill, the outbreak of World War I, the Battle of the Somme, the 1916 Easter Rising, the Suffrage Movement, and now 2021 marks 100 years of the formation of Northern Ireland.

“There is no doubt that people make places and as part of the Council’s 2021 Centenary programme, we want to recognise the contribution made to the Borough and Northern Ireland by engaging all of the community in a range of projects which can tell our story in an inclusive manner.”

It is a huge task, but the council have decided to approach it on three fronts.

Firstly is the creation of the Centenary Collection featuring treasured objects, their story and their place in a shared past.

The council would like to hear from local people who have a special object or possession that relates to any time period between 1921 and today, something that perhaps has been handed down through many generations of your family.

The objects and possessions can be anything from a painting, a sports cup, a war medal, an ornament or item of clothing, a factory clock in card or an item of print and you think this could be part of our Centenary collections.

“If you have anything hat could fit the bill, we would love to hear from you,” said Councillor Montgomery, who is leading by example!

“As Mayor of Antrim and Newtownabbey it gives me great pleasure to lead the way by making my own contribution to this projects as my year in office comes to a close.

“For the Centenary Collection project I have contributed a personal signed copy of the Alexander Irvine book My Lady of the Chimney Corner, as well as a painting of the Barbican Gate in Antrim which is particularly special to me as it was painted by my former teacher, Mr Harry Boyd from Parkhall Secondary School.”

All the items and their stories will feature in a catalogue of the Centenary Collection along with an acknowledgement of all the contributors, including original owners be they living or passed away, so future generations can understand who we were in 2021.

Next up are the Centenary Scripts.

The council are asking all age groups to put pen to paper or fingers to keyboards to explore feelings about Northern Ireland over the past 100 years.

You may prefer to express your hopes for the future either personally, for your family, your community or this place. Participants are encouraged to use the medium of poetry and verse if they wish.

The shared historical experience over the past 100 years has very different narratives and memories and through this project there is a hope to achieve greater mutual understanding and respect among citizens from different traditions.

Civic leaders hope to display as many of these scripts as possible across the Borough, in parks, open spaces, greenways where they can be shared by all and allow for thoughtful reflection.

Last but by no means least are the Centenary Citizens.

Northern Ireland is renowned for the big hearted spirit of its people - and the Borough wants to take the opportunity presented by the Centenary to highlight and recognise the ‘unsung heroes’ who in recent years and times past have made a positive contribution to community life.

In the autumn council will be reaching out and asking for nominations for ‘Centenary Citizens’ either living or deceased, who have played a special role in the last 100 years of the Borough and deserve their story to be told.

Again, the Mayor is giving the plans his whole-hearted support.

“This project is an opportunity to create a shared story of the place we call home with respect for all views on the historical events that shaped who we are today. I would encourage everyone in the Borough to participate”

Full details of how to get involved in the many different projects please visit:

Earlier this year the Council was awarded £94,600 from the Shared History Fund – a fund of £1 million provided by the NI Office and administered by the National Lottery Heritage Fund for groups and organisations to deliver events across the UK to mark the centenary. This funding will support the Council’s Commemorative programme ‘A Country’s Centenary for Our Community’.