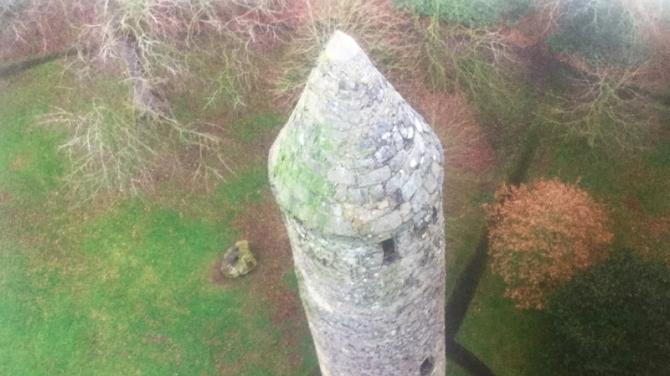 STEEPLE Park may boast one the finest round towers in Ireland, but it also has a long history of never really reaching its full potential.

While the Castle Gardens have flourished, the Steeple has stagnated - with civic leaders at loggerheads at how to best utilise this untapped asset.

When Antrim Council decided to proceed with the construction of a new multi-million pound HQ a stone’s throw from the Steeple there were rumblings that its future could lie in bricks and mortar.

Plans for housing on this historic parkland sparked a public outcry - but council sources were equally adamant that it was necessary to offset the costs of the new build on Stiles Way.

The debate raged on for several years, culminating in a rebellion among the Antrim Town reps who said they would not support a single chimney pot on the popular parkland.

The controversial plans were put on hold, but some remained suspicious of the chamber’s long term plans.

This week the first details of their revised blueprint emerged - and the Guardian can confirm that there is not a single house in sight.

“There is no housing. Absolutely no housing. We don’t need it,” said outgoing Mayor Jim Montgomery.

So what is in store for the iconic parkland?

Rather a lot, it seems, and visitors will see changes soon.

The council has confirmed that major improvement works are set to commence in the coming months.

The focus, quite rightly, will be on the round tower which has continued its silent vigil for a millennium.

The scheduled monument which served as a bell-tower and place of refuge from raiders and is one of only two complete towers remaining in Northern Ireland - yet few outside the Borough are aware of this forgotten historic treasure.

In time, there are plans to illuminate the structure and to make it more visible - as it once was - across Antrim.

Plans for a new interpretive centre telling the story of the former medieval monastery are also on the table - earmarked for the former stable blocks beside Steeple House.

Though the business case is still at an early stage, council chiefs are looking at other innovations too - including the use of VR technology to help bring history to life.

That would undoubtedly lure visitors and school groups to the parkland.

A coffee shop is planned to offer refreshments and there will be picnic tables for day trippers.

The Steeple will be rebuilt too, becoming a community space for meetings and special events. The Mayor’s Parlour will be located there too.

Another pivotal piece of the jigsaw is a multi-million pound health hub - though it will not be based in the former council HQ as earlier thought.

Instead it will be an ultra-modern bespoke new build on an unused apron of land beside the Civic Centre.

Though still in the planning stages, a major player is already linked to the development - and it is understood that the budget could be somewhere in the region of £3 million. Serious money - but then this is a very serious proposal.

The intention is to better integrate the Civic Centre as well, with cycle paths and walkways linking it directly to the park.

There will be new interpretive signage, improved access to the site, extensive landscaping, a history trail and ‘much, much more’.

The final bill for the entire project could be ‘somewhere in the region of £10 million’.

Mayor Jim Montgomery said the works will be warmly welcomed by residents.

“This really is fantastic for Antrim. It shows what the council can do when they work together.

“I’ve really enjoyed working on this with the Chief Executive and my fellow reps. It’s been a very positive experience.”

He added: “It’s fantastic to see this historic site being developed as a tourist attraction while protecting the historic nature of the Round Tower and surrounding parkland.

“Having lived all my life in the Steeple area, I know how important this site is to the local residents and it’s great that we can open up this site to visitors and generate interest in the history of this site and the wide Antrim town area.”