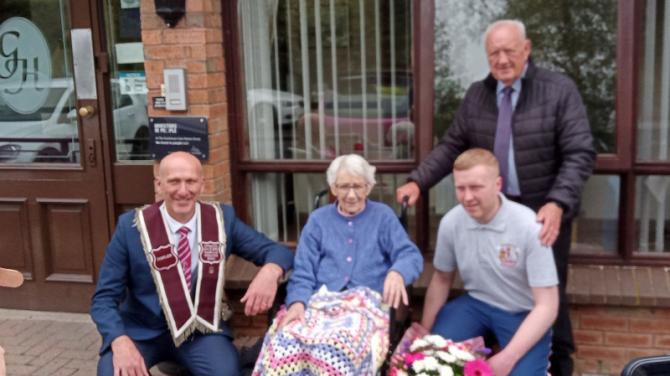 MEMBERS of the Randalstown Cultural Awareness Association paid a visit to Glenkeen Nursing Home recently to make a special presentation to two of the town’s most senior citizens.

This gesture was carried out ahead of a parade of the town by Randalstown Walker Club of the Apprentice Boys Of Derry.

At the stroke of 11am, the Club opened a meeting for the first time since October last year.

At the conclusion, Worthy President Bro. Sam Bell, presented the Club with a wooden cannon engraved with an inscription.

After the meeting the Club was joined by visiting Brethren from across the country as everyone formed up opposite the Memorial Orange Hall.

They paraded their traditional route over the bridge to the barbican gate and back through the town to the Memorial Orange Hall.

More than 100 Brethren joined them on the march.

A salute was taken by the Worthy Governor and Officers before the National Anthem was sung and the parade was dismissed.

After long months of restrictions, the brethren certainly enjoyed being back out on the road.

And that was doubly so, given the significance of the date they were commemorating.

“It was an immensely proud day for our Club and town as we gave thanks for our country and took the time to remember all that it has been through over the past 100 years,” said a spokesman.