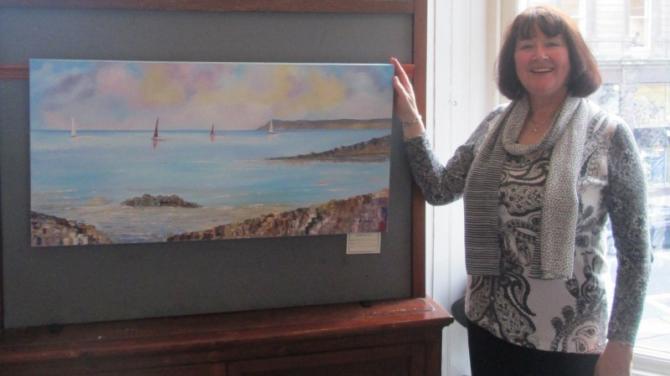 ANTRIM Art Club has been in lockdown due to the COVID-19 pandemic since March 2020.

But work continued behind the scenes. I have prepared the President’s Report and Cathy Fleming penned the Treasurer’s Report after a very different year.

We have tried to keep the Club alive during this time on our Facebook as agreed with Office Bearers Rosemary, John, Cathy, Mary, Jamie who felt it would be beneficial to have a project and to do a painting monthly so we would have a ready-made exhibition to show at the end of lockdown.

Back in April 2020, the After Lowry Exhibition remained in place at Antrim Library as the libraries were closed to the public at that time.

In May we were encouraged by the SAA to which we subscribe and were guided by the magazine for subjects to paint. Photographs from the magazine were posted on our social media. We encouraged everyone to follow Grayson Perry’s Art Club on TV and gave the dates and times of the programme. It proved to be very inspiring and very popular.

I produced a video of our Lowry Exhibition and posted it on Facebook.

Later that month Mayor John Smyth addressed the Antrim community to encourage everyone to keep going.

On May 22 it was announced that four people were allowed to meet outside so John Taylor, Cathy Fleming, Jamie Crabbe and I met in my garden to discuss Club business.

We agreed to persevere and in June the Antrim Guardian ran a report and pictures about the Club’s work over the last 12 months..

In July 20 the SAA organised a Draw a Sunflower competition Rosemary, John and Cathy agreed to take part.

In August I posted some videos by different artists to encourage painting. Later that month we were asked to remove our After Lowry exhibition from the library. One painting was sold - well done Cathy Fleming!

In September myself and Cathy submitted paintings to the SAA - and more demos were posted to encourage painting.

November saw the Remembrance Day commemorations and we asked everyone to submit work - and once again myself and Cathy did.

In December I posted old photos of the 2019 Christmas party. What a difference a year makes.

The Management at Castle Mall asked us to set up an exhibition for the festive season so I sent an email out to all members. Only six responded and we needed around 40 paintings!

John, Stanley and I put up the chains and we socially distanced by hanging our own work on different days over a week which worked well. Five paintings were sold despite lockdown - two by myself and three by Zoltan Terdik.

We received a Christmas card from the Mayor of Antrim - which was very much appreciated.

January 2021 arrived but we remained in lockdown, which meant no meetings.

It is now our 70th year so I am now posting memories from other years.

Various challenges were posted to encourage members to keep painting.

In February I posted Valentine’s inspired paintings by myself, John and Cathy on Facebook.

It was with such sadness that I announced of the passing of our dear friend.

John loved painting and joined in every event at the club with great enthusiasm. He was a wonderful support to all over the past 20 years and we will miss his jolly personality and encouraging way. Good memories.

Our seepest sympathies were extended to John’s wife Sylvia and the family circle.

I attended the funeral along with Treasurer Cathy Fleming to represent the Club. We stood on the roadside across from John’s home. It was sad not to be able to attend a service to say goodbye. We sent a £50 donation from the club to Riverside School in lieu of flowers as that is what John’s family requested.

We were asked to close our Christmas exhibition in the Castle Mall Shopping centre in March and we did this by social distancing over a week and husband Stanley helped me to take down chains and tidy up. It was very sad doing it without John after nearly 20 years.

The painting challenge for March was ‘Spring’ and the committee then decided to open up the exhibition to friends of the club and it was well supported with some fabulous work.