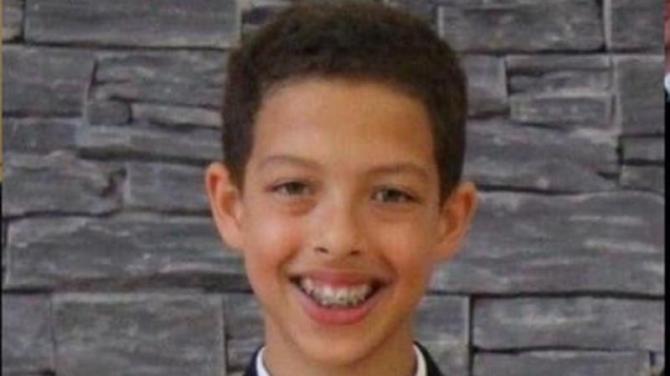 THE CRUMLIN community has come out in force to support the family of Noah Donohoe, who was found dead in Belfast last summer.

The schoolboy’s body was found in a storm drain in north Belfast last June, six days after he went missing.

The disappearance of the 14-year-old prompted a huge search operation involving hundreds of volunteers from the community.

Noah had cycled from his South Belfast home through the city centre, before entering the storm drain.

He had been due to meet friends.

Despite police statements to the contrary, Noah’s family is convinced that foul play was involved in his death.

Some of his clothing has yet to be found and his family allege that he may have been involved in an altercation at Royal Avenue.

An inquest has been scheduled for January 2022 with a pre-inquest review on June 30.

In Crumlin at the weekend, hundreds of people turned out to support Noah’s mother Fiona in her campaign for justice, festooning the town in blue.

“The death of Noah Donohoe was a tragedy that left very few untouched.

“Our thoughts continue very much to be with Fiona, his mother, and all of those who knew and loved him.

“The Crumlin community wanted to play their part to support the Justice for Noah campaign and a number of individuals and organisations in the town stepped forward and organised the erection of banner and balloon launch to highlight this.

“I’d like to give a special mention to the Crumlin Residents Collective , Tesco’s, Signstik and all those who worked to make sure the events on the day happened.

“Crumlin has now joined with the hundreds of towns, villages and communities who are now displaying banners in support of Fiona Donohoe in her search for answers and the truth.”