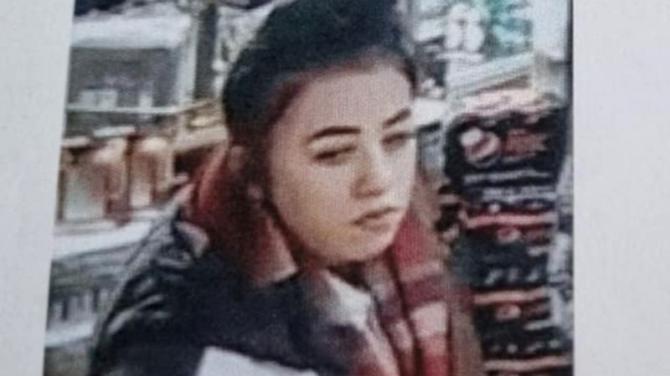 POLICE have released footage which shows some of the last movements of teenager Shona Gillan, who was found dead days later on the banks of the Six Mile Water.

Officers are investigating the death of the teenager, who was discovered near Riverside on Saturday, March 6, three days after she had last spoken to a member of her family.

The last images of Shona alive, which were captured on CCTV inside The Vintage off licence in Church Street at around 6pm on Wednesday March 3, a few hours before her final phone call to family.

Amy Reid, Shona's sister, is asking people to look at the images to see if they trigger any memories, with any information or possible sightings being greatly appreciated.

“I have been given the go ahead to post these photos of Shona from CCTV.” she said.

“These are the last images of Shona alive but as you can see, you would easily miss her when going by the photos (selfies) I have previously posted.

“She is also wearing some pieces of clothing which aren't hers.

“This CCTV was around 6pm on March 3 in Antrim town.

“I hope this will trigger people's minds, please any information or sightings helps massively!

“If I can ask you if you're not familiar with my appeals, look on my profile for previous posts on the whereabouts Shona was on this evening.

“Thank you for your continuous support.”

The family has erected posters and put leaflets through doors in the area where she was last seen.

Last week, the family received an anonymous letter from a member of the public which they say contained ‘significant information’ regarding Shona's final movements and have appealed for them to come forward to police.

Amy continued: “I don't understand, why write a letter which we know is so significant, to then not come forward and help us as a heartbroken family get the answers for Shona, we really need your help.

“Please, I beg for you to have the courage to come to myself or the police, there is absolutely nothing to be afraid of.

“I personally couldn't sleep at night knowing I was holding such information that is inside this letter.

“You had so much courage sending this, you made the first step.

“But we need you to come forward, we cannot be left in the dark as this letter without who has wrote it isn't enough.

“I’m here waiting every day for a phone call or message to say you have came forward, PLEASE do the right thing, us along with the police are urging you to.”

Police have said that a post-mortem examination has been carried out and they are not treating the death as suspicious.

However Shona's family believe there are still too many unanswered questions regarding her death.

A PSNI spokesperson said: “Police continue to appeal to the public for help in tracing the movements of a woman whose body was recovered from Six Mile Water, close to Riverside, in Antrim on Saturday March 6.

“18 year old Shona Gillan was reported missing on Saturday morning but had not been seen since the afternoon of Wednesday March 3 when she left her home in the vicinity of Valiant Court, Antrim.

Inspector Buchanan said: “As part of our investigation into the circumstances of her death we are keen to establish when and where Shona may have entered the water and to give her family those answers.

“This is obviously a deeply upsetting and distressing time for Shona’s family and loved ones, and I am appealing for anyone who saw or spoke to Shona in recent days, or who can provide information to police to please call us on 101, quoting reference 1122 06/03/21.”