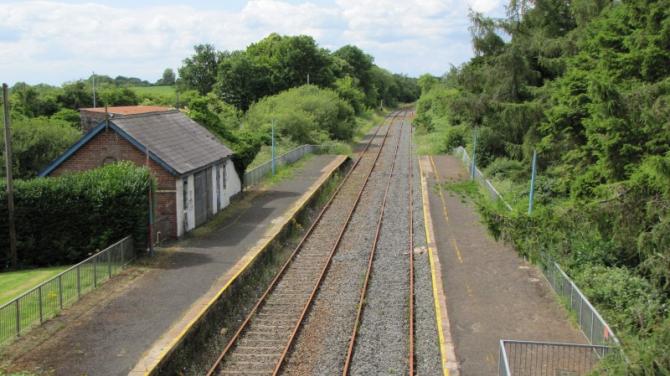 IT has emerged that over £2 million has been spent on the old Crumlin rail line since it was closed in 2003.

Before the re-opening of the more direct Bleach Green line, thousands travelled along the Knockmore line every day.

Since it was moth-balled, it has been used to test new rolling stock.

Pressure for it to be put back into active service has been exerted, but to date any plans to do just that have run out of steam.

But the South Antrim Railway Group have made fresh calls for an urgent rethink.

Chairman Jay Burbank told the Antrim Guardian this week that extending the network would drive more cars off the Borough’s busy roads.

And there is also the small matter of a long-mooted connection with Belfast International Airport which stands tantalisingly close to the abandoned track.

“During the pandemic it became ever clearer to me how dependent the southern portion of County Antrim is on transportation,” said Jay.

“We are a community of villages and market towns living and working in concert with the city of Belfast.

“Yet, despite the busiest roads in the province - the M1 and M2 - running through our area, there are few options for railway transportation.

“Inter town railways in Antrim and Lisburn service a great number of people who live close by, but for many it isn’t a reasonable option to drive to these larger towns then pay for rail fares as well.

“That is why we have two principal aims. Firstly, we seek to restore the Knockmore railway line connecting Antrim to Lisburn via Belfast International Airport. Secondly, we are seeking to have a halt built at Ballymartin Park and Ride on the M2 junction 5.”

And they have already brought their crusade to the floor of the Assembly.

“Through working with John Blair MLA, we had the opportunity to get a response to an Assembly question from Infrastructure Minister Nichola Mallon on the public expenditure on the mothballed line.

“According to Department figures, over £2 million has been spent on the line since 2005.

“It closed in 2003 to passengers and has been maintained as a strategic route in case of emergency ever since then.

“We know that the line will require more funding from the Department and Translink in order to be fully operational again. However, in line with the green agenda and post pandemic calls for more active travel, it is a worthwhile investment into the villages of Crumlin, Glenavy and Ballinderry which is long overdue.”

The Group added that the ‘regional importance’ of the line was clear.

“Our busiest airport sits adjacent to it and exploring the possibility of a halt at British Road should be seen as a priority.

“There is no use in flooding the highways with more buses and private cars when tourism resumes its normal volumes again after the pandemic.

“Having a strategic rail halt at Belfast International Airport would allow the Belfast region to market itself as a vibrant interconnected hub for business.

“Minister Mallon made clear her commitment to active travel and has included the Knockmore line in her ‘All Island Strategic Rail Review’. This is in conjunction with minister Eamon Ryan from the Republic of Ireland.

“This should provide more weight to our argument which will need buy-in from the Department of Finance and Executive Office as the Infrastructure Department cannot achieve this alone.

That is why we will keep campaigning and keep challenging those with the authority.

“The communities of South Antrim, the Greater Belfast Region and Northern Ireland deserve the option of rail.