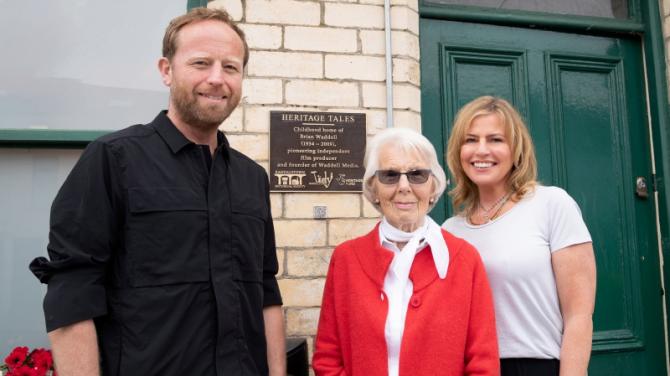 A TRUE pioneer of the Northern Ireland television industry has been honoured in his home town of Randalstown.

Brian Waddell, who died in 2009, is one of locals commemorated in a new heritage trail in the town.

The project is the braindchild of Randalstown Historical Society - and the TV legend’s family were thrilled by the recognition.

His sister Frankie McBrien and his children Jannine and JB Waddell, who both followed their father into the television production industry, unveiled the plaque in Randalstown earlier this week.

“I am deeply touched that the Randalstown Historical Society has chosen to highlight my father’s childhood home, 11-13 Main Street as one of their places of historical interest as part of the prestigious Heritage Tales initiative,” she said.

“After working as a reporter and producer at the fledging Ulster Television, my father took on coveted role of Controller of Programmes which he enjoyed for many years before having the foresight to go out on his own to set up one of the UK’s first production companies in Waddell Media.

“My father was very proud of his Randalstown roots and our family is very touched that his memory is being kept alive for future generations in his hometown by this beautiful tribute which includes a wonderful write-up about his life and career on the website which I hope will inspire the next generation of storytellers.”

Full details about the project can be found at https://randalstownarches.com/randalstown-heritage-tales/