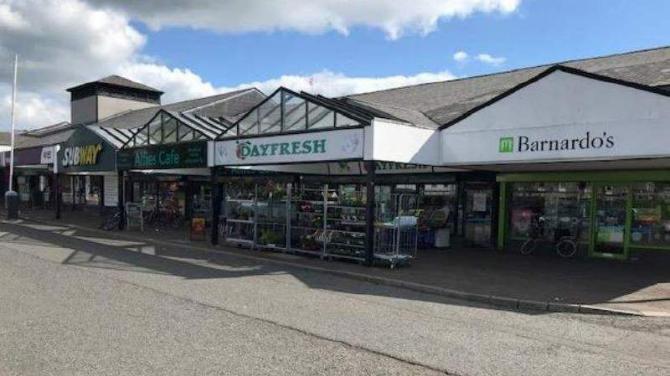 ‘BLAND, unattractive and nondescript’ - the long awaited transformation of the Castle Mall shopping centre could finally be on the cards.

Planning officials are set to recommend the partial demolition and reconfiguration of the complex this week, which it is hoped will hook a major national retailer and create a new, modern looking shops and frontage.

As part of a raft of regeneration schemes aimed at revitalising Antrim town centre, Edinburgh House Estates, which purchased the Mall in 2010, is applying to merge a number of existing retail units within shopping centre to create a larger space, demolish of 56m of the north-eastern facade facing the council-owned car park and replace it with a new facade and associated hard landscaping work.

With many units lying empty and critics long pointing out that the dated edifice hides the historic centre from the view of passing traffic, the Antrim Guardian understands that there are plans afoot to create an improved food offering and remove the unsightly fencing and ugly industrial equipment which currently greets visitors entering the town.

The proposal is due to come before the Planning Committee of Antrim and Newtownabbey Borough Council this week.

The application site is located within Castle Mall, 26 Market Square, Antrim and includes units 1-9 which back onto the existing car park and service access areas.

A report by planning officers said that, at the time of the last site inspection the majority of the retail units were either closed or vacant.

“The location forms the ‘rear’ elevation of units within Castle Mall, adjacent to a service road and is highly visible to the main extensive public car park which lies adjacent.” said the report.

“This facade is comprised of a mansard roof arrangement in dark grey fibre tiles and rough cast white render to the walls.

“The facade has numerous access doors, fenced off areas with bin stores and metal railings, with air-conditioning units and ventilation grills on the walling.

Sixty neighbouring properties were notified and no letters of representation were received.

Part of the application site involves minor amendments to the foot path to create level surfaces for access and egress for shopping trolleys and those with mobility disabilities.

Part of the land where these works are to be undertaken are within the council’s ownership and as a consequence the application is required to come before the Planning Committee for consideration.

The report said that the proposal is ‘likely to help revitalise the existing Castle Mall and further enhance the function and vitality of Antrim town centre.’

The scheme proposes the demolition of a section of the existing false mansard roof (circa 56m) including a small extension to Unit 3 and is to be replaced with a new frontage and additional entrance way to the Castle Mall which will provide direct access onto the carpark.

Internally, the design was considered acceptable and generally comparable to the existing centre and has little to no impact on the town’s Conservation Area.

The report said: “From the exterior, the northern elevation which faces onto the carpark is described as ‘fairly nondescript, devoid of architectural detailing and generally turns its back to the public road, carpark and is highly visible from Castle Way.

“The introduction of a frontage on this elevation assists in opening up Castle Mall and will bring a significant visual improvement to this part of the town.”

Overall it is was considered that the scale and design of the proposal was acceptable and would improve the overall character and quality of this area and the Conservation Area.

Given the location within the existing Castle Mall it was considered that there will be no significant impact upon residential properties within the wider area.

As the proposal does not include any additional floor space and having regard to its town centre location and proximity to an existing car park, it was considered that there would be no road safety or parking concerns as a consequence of this development.

It was noted that DfI Roads also have no objections to the proposal.

A condition attached was that work should be started within five years of planning permission being granted.

A separate application due before the committee pertaining to the impact upon the Conservation Area, said that Planning Officers consulted with DfI Planning advising that it is intended to grant Conservation Area Consent to demolish minor elements of the rear façade to facilitate the overall development.

DfI Planning has advised that it does not consider it necessary for the Demolition Consent Application to be referred to it for determination.

The report continued: “This is a welcome addition to this elevation as it facilitates a shop frontage onto a bland and unattractive frontage which offers no positive contribution to the Conservation Area or the Castle Mall itself.

“The proposal is considered to represent an enhancement on what presently exists on this elevation.”

The Council’s Conservation Officer agreed with this view stating: “The proposal involves the alteration of a part of the existing elevation of the Castle Mall which does not exhibit any architectural or historic merit and therefore does not make a material contribution to the character and appearance of the Conservation Area at this location.

“The location also has little relationship with the main focus of the Conservation Area which is centred on High Street and Fountain Street.”

With regard to the potential impact on Antrim Conservation area, it was considered thatthe proposal will ‘improve the overall character and quality of this area’,

A council insider told the Antrim Guardian: “There are hopes that the work will attract a major national retailer and there is one name in particular who is ready to sign on the dotted line.

“There will be new shops at the rear of the centre and a much more modern, brighter and airy facade to welcome people arriving in the town.

“This planned regeneration will feed into major changes to the look and feel of Antrim town which will hopefully make it a much more attractive and inviting place for locals and tourists alike.”