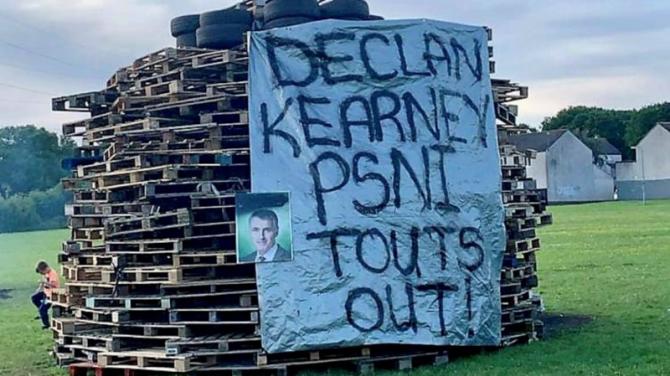 POLICE removed images of Sinn Fein South Antrim MLA Declan Kearney from a ‘rogue bonfire’ in Springfarm at the weekend after a war of words between the politician and organisers.

Declan Kearney said: “Just four weeks ago, the Housing Executive removed a rogue bonfire in the Springfarm estate in response to a series of representations which I made on behalf of concerned residents, who were appalled at the prospect that such a public health hazard and risk to community safety should be allowed to proceed.

“That was the correct decision.

“In the interim it was clear that the same group of individuals responsible were determined to push ahead and rebuild the bonfire.

“This was evident from a number of messages posted on the ‘Springfarm Bonfire’ Facebook page, many of which included threatening references to myself and open defiance towards the authorities concerned.

“During this time numerous reports were provided to relevant agencies about the storing of wooden pallets on the estate.

“The bonfire continued to be built and was finally set alight, accompanied by the usual antisocial behaviour associated with such an event.

“In a particularly sinister act of defiance, the bonfire organisers draped a large banner on the structure emblazoned with my name and a reference to ‘PSNI touts’.

“They also placed my election posters on the bonfire with the clear intention of burning these.

“I am grateful to the PSNI who intervened and removed these materials from the bonfire.

“The placing of this banner and the election posters on the bonfire constitutes a hate crime, and I will be pursuing this with a view to seeking prosecutions of those responsible.”

See next week’s paper for a response from the Housing Executive.

“I want to thank the PSNI for its proactive approach towards this bonfire, and to the residents of Springfarm for their resilience in the face of the blatant intimidation they have endured over recent weeks.” he said.

“I will not be deterred or intimidated from continuing to represent the interests of Springfarm residents with all relevant agencies towards ensuring there is no repeat of these recent events.”

The organisers of the bonfire claim that the bonfire was not sectarian and the event at the weekend was open to all.