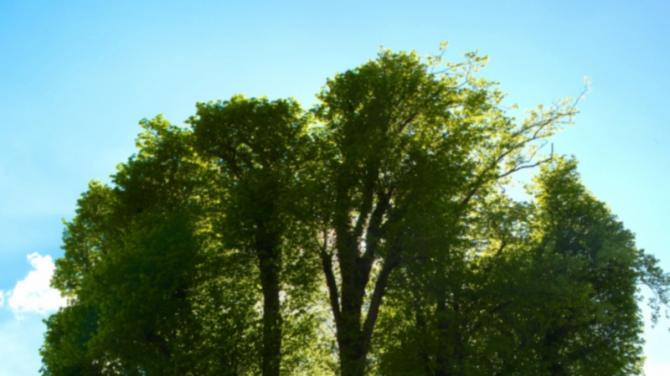 ASK anyone in Crumlin about the 12 Apostles and, chances are, they will point you in the direction of Parkfield just off the Belfast Road.

For generations that has been home to a group of lime trees planted in a circle. Each stands impossibly straight, and over 20 metres in height.

It is quite a spectacle to behold, and they were named after the Apostles - even though there are, in fact, 14 of them!

No-one seems to know who planted them over a century ago, but it is understood that the ground was the original site of the first Presbyterian Church in Crumlin.

Over a decade ago they were under threat by property developers, who wanted them axed to make way for houses, so they were hastily protected by a Tree Preservation Order.

But that’s another story.

This week we look back at a tragedy that occurred in their shadow at the height of the Second World War.

The grave of an RAF hero in the cemetery at St Catherine’s Church in Aldergrove bears testimony to a horrific wartime plane crash in a field just beside that unique cluster of trees.

Buried there is Squadron Leader Dennis Fiennes Wykeham-Martin DFC, who was just 28 when he died from injuries received when a Liberator from 86 Squadron failed to gain height and came down next to the Apostles.

It happened just after midnight on May 14 1943 as the plane was taking off to fly on convoy escort duty over the Atlantic.

Wykeham-Martin suffered a fractured skill and other injuries from which he perished 36 hours later.

Sergeant H Little suffered a fractured skull and other injured from which to too later succumbed.

Two other members of the crew, Pilot Officer S Neal and Flight Sergeant A Cowan were seriously injured but miraculously survived to tell the tale.

Of the dead, only Squadron Leader Wykeham-Martin was buried at St Catherine’s, the other victims being transported to their respective homelands for their funerals.

His headstone bears the inscription: ‘In memory of Dennis, who gave his life in the Battle of the Atlantic’.

It was the sad end of remarkable military career.

Wykeham-Martin received his Pilot Officer commission in January 1939 and he showed early promise, gaining promotion to Flying Officer by July the following year.

During the Battle of Britain, Dennis flew with RAF 53 Squadron out of RAF Delting in Kent.

On June 30 1941, Wykeham-Martin’s crew spotted U-371 under the command of Kapitänleutnant Heinrich Driver in the Bay of Biscay. The U-boat reportedly mistook the Blenheim for a German Junkers JU-88 and failed to engage.

Wykeham-Martin sized the advantage and dropped a pair of 250lb anti-submarine bombs and a 250lb general-purpose bomb. The diving attack from the stern end of U-371 took its crew by surprise. The bombs exploded around 30 yards off the starboard bow.

U-371 went into a crash dive. A final attack from the port side saw the Blenheim drop another 250lb bomb over the bow.

By July, Wykeham-Martin had been promoted to Flight Lieutenant.

The impact was enough to submerge the craft. As it went under, the German submarine left a bubbling pool of oil.

The commendation read: ‘This officer’s vigilance and alertness have enabled him to sight and attack enemy submarines on four occasions. All these attacks produced promising results; after one attack which Flt. Lt. Wykeham-Martin carried out large air bubbles and oil were observed. This officer has served with great distinction, and he has shown great skill when flying in adverse weather conditions’.

On June 11 1942, Wykeham-Martin was again mentioned in despatches.

Soon after this, he joined RAF 86 Squadron at RAF Aldergrove - and the rest, alas, is history.

The crash was a human tragedy - but sadly it was only one of many as the Allied war machine mobilised in the Borough.

RAF Aldergrove played a vital role in escort duty of British shipping, bringing in supplies and foodstuffs in the face of the enemy U-Boats that prowled the coastline.