Antrim Council goes to war - with the Ministry of Defence! 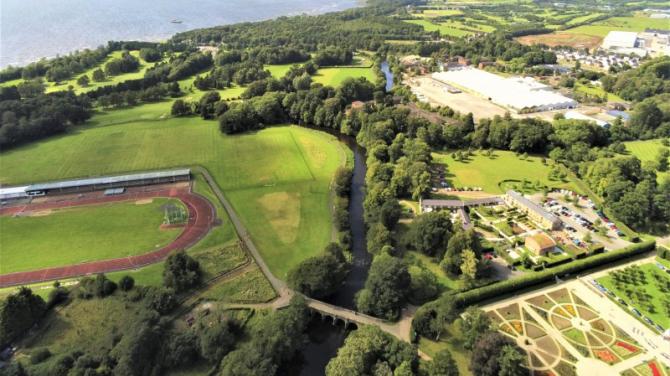 ‘What were they thinking?’ is a common enough refrain, but occasionally the decisions taken are so bewildering - so disastrously incomprehensible - that some fear their heads will never stop shaking.

For Prince Charles, that breaking point came in 1984 when the modernist extension to the National Gallery was unveiled, to an orchestra of jaws dropping across the capital.

“It’s like a hideous carbuncle on the face of an elegant and much-loved friend,” was his considered opinion. Suffice to say, he was not a fan.

Antrim’s moment came in 1992 when rival plots were hatched to radically alter what is now considered the jewel in Antrim’s tourism crown - the Castle Gardens.

On the one side were the Ministry of Defence, who decided that they had no option but to ‘invade’ to allow for the expansion of the Massereene Barracks.

Rightly or wrongly - but mostly wrongly - the men from the Ministry decided that they simply had to have another five-acre slice of the historic Castle Grounds.

And what the MOD wants, it tends to get. They had £10 million burning a hole in their pockets, and they wanted to spend it in Antrim to allow the camp on the banks of the Sixmile to accommodate a full Regiment of Royal Engineers.

The army were not going to get it without a fight, however.

Local environmentalists, led by Brian Wallace, were soon up in arms and sections of the council decided that they should not simply surrender.

MP Clifford Forsythe organised a hasty meeting with the MOD and was told in no uncertain terms that the blueprints had been dictated on security grounds.

Nevertheless, the council decided that they would be taking no prisoners when a delegation was sent to meet with Viscount Cranbourne, the Under Secretary of Defence for a special summit at Whitehall in November of that year.

The arrival of bulldozers amounted to historic vandalism, they said, conveniently forgetting that their predecessors had been there first, ordering the demolition of the old castle ruins in April 1970!

They also cited the devastating impact on local wildlife. And besides - they had plans of their own...

Incredibly, that same month they revealed that they had drawn up plans to build a new multi-million pound civic centre on the footprint of the castle, offering new offices for hundreds of staff in the heart of the grounds.

Apparently the proposal was first mooted in 1986 when a secret sub-committee unanimously agreed that the parkland was the best place to do business.

Around £2 million had already been set aside, and the plan was to emulate the majesty of Craigavon's new HQ.

Unsurprisingly, Brian Wallace was not amused, branding any such move ‘nothing short of sacrilege’.

The campaign soon gathered momentum and pressure was brought to bear.

The Ministry reluctantly scaled back their demand and made do with a smaller sliver of land - which is perhaps just as well, considering that the Engineers’ stay in Antrim was to be a short one.

The Council eventually had second thoughts, too, instead opting to throw their millions at a new site a stone’s throw away from the Steeple on Stiles Way.

The last decade has been kind to the Castle Gardens, as they are now known.

Huge investment has seen it restored to its former glory - and visitors have been flocking to it ever since.

But next time you enjoy a stroll through the grounds, pause for a moment and reflect on what could have been if the vision of autumn 1992 had become a depressing reality...