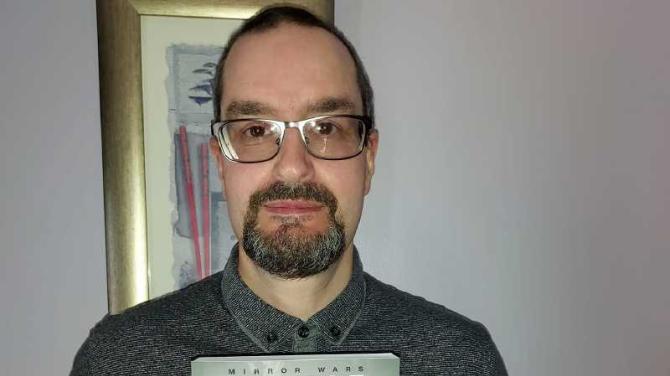 WHEN Alan Bayles, who worked as a receptionist at Oriel Surgery for 12 years, became unwell and could no longer work, he refused to sit back and feel sorry for himself.

Alan, originally from Durham, came to Antrim 15 years ago to be with his wife Monica, who hails from Moneyglass, and has just published his first novel, Mirror Wars: Double Jeopardy.

His colleagues at the surgery helped review the chapters and as a tribute, several characters are named after staff members.

In a touching gesture, the book has even been dedicated to the late Dr Prakash and Dr Little, two sorely missed partners at the practice who passed away a number of years ago.

The book is in the sci-fi/thriller genre and tells the story of a failed military experiment and a global conspiracy spanning decades, as two worlds collide.

“I have been wanting to write a book for 30 years, it was a childhood dream and a passion, but I was always putting it off, thinking I was not good enough, that I needed to be university educated or have a degree,” he said.

“The idea for the story was always in my head, and last year when I was off work ill and sitting feeling sorry for myself, I was trying to keep my mind active and I thought, this is a good time to try and write a book.

“I did some research about how to go about it and watched some videos and started from there, it started to come out and the more I wrote, the easier it got.

“I wanted to pay homage to some of the girls I worked with and named characters after them - of course I checked with them first!

“And I wanted to dedicate the book to Dr Prakash and Dr Little and make it in their memory, they were two lovely people.”

Alan said he draws inspiration from a wide variety of sources.

“I have always loved Stephen King and James Herbert, especially his book Rats, Clive Cussler and Neil Gaiman, anything fantasy based.

“I love the Marvel comics and films, Star Trek, Babylon 5, Blake’s 7, anything like that and I have included scenes which pay tribute to all those things that have inspired me in the past.

“The book contains nods to some of my favourite authors, films and TV shows that have ignited my imagination over the years.

“I also used my experiences of being a twin to help me write about evil doppelgangers!”

The book’s synopsis reads: “12th September 1932: a failed military experiment opens the doorway to a parallel world and an ancient empire with ties to our world.

“Along with his friend and colleague, Detective Sergeant Andrew Jenkins, they begin an investigation which uncovers some startling facts. Inspector Barnes is soon joined by Professor Claire Tulley, a history professor who has a personal stake in the investigation.

“They are soon embroiled in a fight for not only their own survival, but also for the fate of the world against an enemy that is oddly familiar.

“As two worlds collide, an ancient inhuman force waits in the shadows….

Alan continued: “I self-published and had to find my own editor and cover designer.

“If anything, writing was the easy part, I wrote too much and in the edit I had to cut down a lot.

“But having my own book in my hand, on my bookshelf, that is indescribable, it’s hard to put into words what that feels like.”

And he won’t be stopping there!

“It is the first of a trilogy, in my head and I do intend to start the next book soon.

“It’s not perfect and it won’t be everyone’s cup of tea, it is not Shakespeare, but I hope people take it for what it is, an enjoyable piece of fiction and I hope people have as much fun reading it as I did writing it.”

Practice Manager Karen Logue, who has a doctor in the book named after her, is a big fan.

“He has been coming to the surgery to see what we think of each chapter and you definitely want to know what is happened and are intrigued to find out what happens next.

“My husband is a reader and hasn’t been able to put it down!”

To get a copy of Mirror Wars: Double Jeopardy, go to www.amazon.com/Mirror-Wars-Jeopardy-Alan-Bayles-