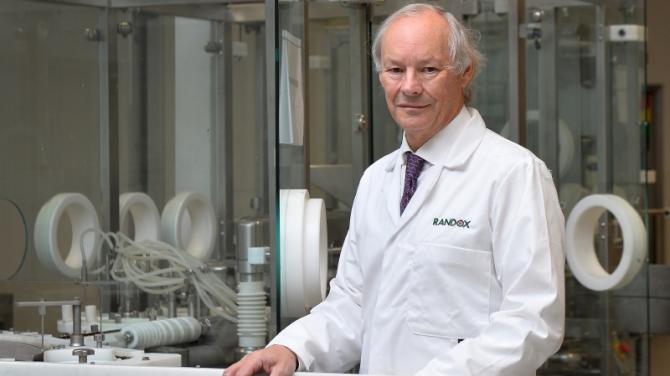 INCREDIBLE as it might seem, dissenting voices in the council tried to scupper the conferment of the Freedom of the Borough on the man at the forefront of the fight against COVID-19.

Back in April 2009, plans to bestow Antrim Borough Council’s highest honour upon Dr Peter Fitzgerald of Randox quickly descended into an unseemly war of words.

Murder, money and old-fashioned political posturing conspired to tarnish plans to celebrate the towering achievements of a local man whose trailblazing work has been credited with saving countless lives.

It all began as every great storm does - with a period of calm.

Alderman Mervyn Rea kicked the whole thing off by telling the council that it was with ‘immense pride’ that he had decided to forward Dr Fitzgerald to join former Chief Executive Sam Magee and jockey Tony McCoy as the third Freeman of the Borough of Antrim.

The local man started from humble beginnings in a make shift lab in the garden of his parent’s Crumlin home and soon transformed it into a multi-million pound business employing hundreds in the Borough and supplying 30,000 hospitals and labs worldwide with diagnostic tests,

Randox had previously scooped the Queen’s Award for Export on no fewer than five occasions at the time of Alderman Rea’s request, and it had been estimated that the equipment distributed around the world was capable of performing 60 diagnostic tests every second - saving countless lives in the process.

The previous year, Alderman Rea had agreed to confer the prestigious honour on the basis of ‘turbulent financial waters’ threatening the Council.

The rescheduling of the grand event was once again deferred for a further month the following year, due to the council’s monthly meeting having to be cut short to allow members to attend a service in honour of the soldiers gunned down at the Masserrene Barracks.

Finally, Aldermann Rea was able to broach the subject to his peers with his plans to celebrate the ‘unsung local hero’.

“I thought long and hard about this,” he said. “It’s been on my mind for a long time - and the more I think about it, the more I realise that this man is unique.

“Many lives are being saved around the world because of the genius of this man.

“I feel recognition is due for this man in this Borough - which is his home. I hope I can get consensus here for such a worthy cause.”

Hopes may have been high when the issue went to the floor - but they were soon dashed by then DUP group leader Trevor Clarke who argued that ‘technically’ the honour could not go ahead.

He said that the council’s Resources Committee had agreed that if there was no application to confer the Freedom of the Borough by the March meeting then they would not be considered in the current financial year.

Mr Clarke therefore reasoned that any decision to proceed, regardless of the reason for any delay, represented a ‘clear breach’ of the council’s self imposed six-month rule, which prevents issues being revisited during that time frame.

While he conceded that Dr Fitzgerald was ‘outstanding in his field’, there was no provision to honour him following what had been a ‘difficult’ battle to keep the rates down.

Party colleague John Smyth emphatically agreed, prompting groans of disapproval after he asked whether ‘the multi-millionaire would pay for it himself’.

“It costs around £15,000 to confer the Freedom of the Borough. If someone can tell us where the pot of gold is buried for this, then so be it,” he said.

“We’re telling people there’s no money for community events yet we are spending money on a man who is already very wealthy. It's a disgrace.”

Visibly upset, Alderman Rea insisted that the costs would be a fraction of that, adding that he had hoped to make the conferment the centrepiece of the forthcoming Community Excellence Awards - a view that majority of the council held firmly.

“The reality is that you are splitting hairs in light of two murders. Shame on you,” Mr Ford said.

“Why are you stopping me after he makes an accusation?” said the furious DUP man. “What about some parity here?”

The Mayor responded by asking if the councillor ‘even knew how to spell parity’.

Alliance Councillor David Ford added that Dr Fitzgerald had not only been a force for good on the world stage, but a loyal friend to the Antrim area.

“Whereas Tony McCoy has succeeded outside of the Borough, Peter Fitzgerald continues to work in this Borough and offer employment here,” he said.

SDLP councillor Thomas Burns also gave his enthusiastic backing, noting that ‘he’s unique in what he brings to this Borough’.

“This gentleman came from humble beginnings but he has received world recognition for his pioneering work,” she said.

“We’re very honoured to have a man of this status in our community,” he said.

“The amount of children he has saved from vicious diseases is incredible.”

However, some were less convinced of the merits of honouring Dr Fitzgerald, including Traditional Unionist Mel Lucas - who suggested that the Council should pause to consider the implications of ‘rewarding business people’.

“He has been a very successful businessman and he has developed a lot of research, but he’s not offering employment solely within the Borough and Northern Ireland,” he said.

“I think we would be setting a precedent here in my view. If we were minded to honour this gentleman, where do we stop? There are dozens of successful businessmen in this Borough.

“I congratulate him on what he has done but none of the debate here today has convinced me that this particular businessman - who has made a huge success of what he has done - deserves this honour.”

The motion was taken to a vote, in which DUP councillors Trevor Clarke, Brian Graham, Pam Cameron and John Smyth voted against whilst TUV man Mel Lucas abstained. The rest of the chamber voted in favour.

It was far from the result Alderman Rea craved, but things went from bad to worse when further verbal sparring continued in the corridors.

Councillor Clarke sought to justify his position, but was confronted by a furious Mayor accusing him of ‘playing games’ at the expense of murdered soldiers.

“What you’ve done today is a disgrace. You knew fine well that Mervyn put this back a month to allow an opportunity to pay our respects and now you have the audacity to use that against him? How dare you.”

Speaking afterwards to the Guardian, Councillor Smyth insisted that the Freedom of the Borough was a luxury the council simply could not afford.

“It is the message we are sending out to our officers. The message is, no matter how we tell our officers they must stick to the agreed budgets the councillors can do whatever they want.

“At the moment we have curtailed the Lough Neagh Brass Bands to four concerts because there was not enough resources. The budget to deliver Community Development has been drastically cut where some long standing community groups will not receive much needed resources to deliver working with young people because of the new point system to exclude groups.”

But SDLP councillor Thomas Burns insisted that the ‘modest cost’ of holding the ceremony was dwarfed by the millions invested by Randox.

“Dr Fitzgerald is one of our greatest success stories and he has consistently been a credit to his profession and to this Borough,” he said.

“I’m absolutely disgusted that Trevor Clarke and the DUP team have gone out of their way to embarrass him.

“All they have managed to do is drag Antrim Borough Council back into the gutter.”

“After this, Dr Fitzgerald will probably tell us to stick it - and who could blame him?”

In the event, he did not. He accepted the honour and later spoke of his pride at joining the select group.

Fast forward to the current COVID pandemic, and Randox has been a key part of the UK’s National Testing Programme.

Yes, his company has continued to thrive and expand - but many lives have been saved along the way.