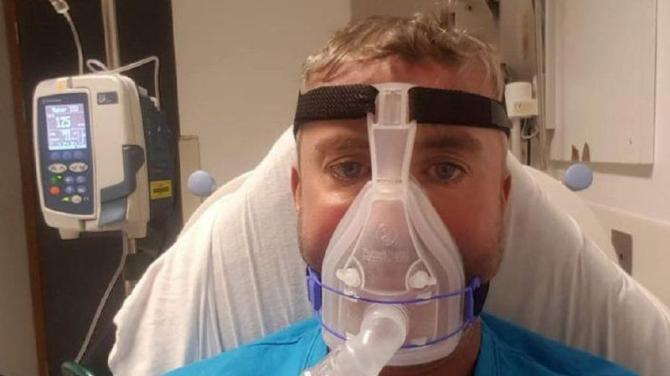 BY his own admission, Gerald Prentice was cautious about receiving a COVID jab.

He was healthy and, at just 40-years-old, he had time on his side.

Though he was aware of the clamour for adults to get their vaccine, he decided to wait for ‘more information’ before taking the plunge.

Then the pandemic came home and he caught coronavirus - and it hit him like a wrecking ball.

Struggling to get a breath, Gerald was rushed to Antrim Area Hospital for emergency treatment.

“Although I was making good headway at that stage, they needed to act fast for my health and my well-being and so on,” he told the BBC.

“They needed to get me to an ICU unit - and fast.

“I was in an out of consciousness in that ICU unit. Basically lying on my back for four days and four nights.

And a lot of time to consider the choice that may have led him there.

After four terrifying days contemplating those four walls and wondering if he would see family and friends again, had his view on the vaccine changed?

He said his predicament was reflected when he asked a doctor if he was going to die and they replied they would get him the ‘best help we can possibly get you’.

That’s the point he realised that his life was indeed on the line, and re-evaluated his view on whether the jab would have helped him combat the virus ravaging his body.

“That can ruffle feathers, whatever.

“I know for a fact in my heart of hearts had I had something in me to build an immunity up towards it, to fight against it - I’d have been better off, yes.”

He confirmed that he would now be getting vaccinated.

It is a significant move at a time when infection rates across Antrim and Newtownabbey remain worryingly high.

Last week there were 551 new cases recorded in the Borough, bringing the grim total to 11,709.

And to date there have been 290 deaths.

This week Professor Ian Young, Northern Ireland's chief scientific adviser, warned that about 80 per cent of COVID-19 patients aged under 60 in hospitals have not been vaccinated.

Department of Health figures revealed that of the 267 COVID inpatients last Monday, 114 were aged under 60 - and 91 out of those 114 were ‘totally unvaccinated’.

Furthermore, 15 per cent of adults in Northern Ireland are yet to receive their first dose.

“Younger people who chose not to get vaccinated have a risk of developing a serious illness,” said Professor Young.

He added that some were deterred from getting the jab because of ‘falsehoods’ or a sense that their age would prevent serious complications.

He stressed, however, that it had the potential to put anyone in hospital - just ask Gerald Prentice.

“There are a small number of circulating myths,” said the senior medic.

Health chiefs have also attempted to highlight the effect the vaccination programme has had on reducing the number of people in hospital.

It noted that for each 1,000 cases of coronavirus in Northern Ireland, 22 were currently being admitted to hospital.

That compares with 80 in every 1,000 being admitted to hospital back in December.

“While the current prevalence of the virus in Northern Ireland remains a serious cause for concern, we would be in a much worse situation but for our vaccination programme,” she said.

“Vaccination protects us, it protects our families and protects others. It helps us reclaim normality.

“Of course, vaccination doesn't totally eradicate all risk - no vaccine in history has ever been 100 per cent effective 100 per cent of the time.

“But it does make us significantly safer - it shifts the odds in our favour.”