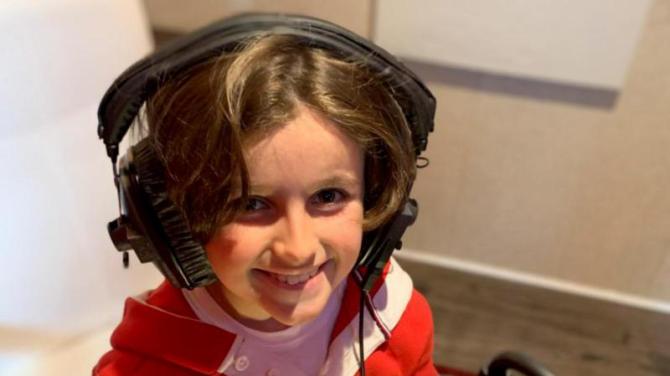 A RANDALSTOWN boy is lending his voice to the main character in a new Channel 5 animation hitting the screens.

Shea Brady (8) voices Odo the owl, which made its debut on the station’s Milkshake slot last Saturday.

Rights have already been sold around the world, meaning that means Shea’s voice will be broadcast to children in Germany, the USA and Latin America, Australia, Canada, France, Sweden, Norway, Poland and Wales.

The series, which has also been picked up by RTE, aims to help combat the rise in anxiety and depression in children by teaching them the importance of self-efficacy and belief in themselves.

Targeted at three to five-year-olds, Odo is set in the Forest Camp for Young Birds and also tackles issues like migration, racism, inclusion and adoption.

Shea’s voice will remain unedited in every English speaking country, though he said it was a long process of online auditions before he finally landed the lead role at the end of 2020.

“I had to do lots of auditions for Odo over Zoom and finally got to go to the studio for a final audition,” he said.

“I did some voice acting for about an hour and when I got out of the booth, they told me I had an early Christmas present and I’d got the part!

“I was very happy and proud of myself!”

And while Shea is enjoying is role as the voice of Odo, he has ambitions on a grander scale.

“I’m a big fan of anything to do with Vikings and gladiators; my favourite movie is Troy,” he said.

“I like to dress up in different costumes and use my swords. I do love animated movies, so I’m super excited about being the voice of Odo.”

Shea is joined in the animation by another young voice from Ireland, with eight-year-old Julia Dillon, from Co Laois, playing his best friend and shy orphan bird Doodle .

And Colin Williams, creator and showrunner at Sixteen South, added: “Lily (our lead from Lily’s Driftwood Bay) was the first major kids character with a Northern Irish accent to be broadcast all over the world without being reduced.

“We wanted to do the same with Odo, so we cast Shea in the lead role.”