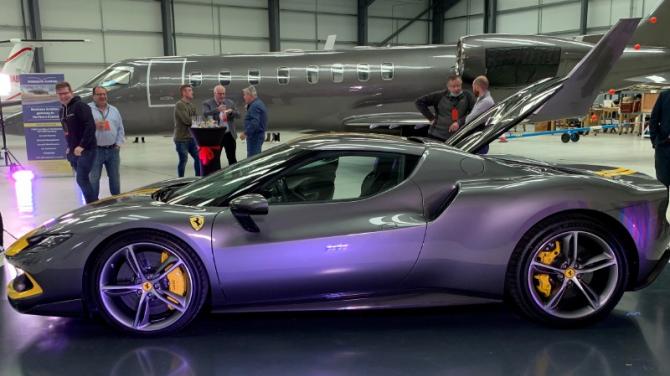 LOCAL company Woodgate Aviation saw off competition from some of Northern Ireland’s big name venues to be selected by Charles Hurst Belfast and Ferrari for the Ireland launch of the brand new 296 GTB.

The imposing hangar at Belfast International Airport which attracted 100 existing and potential customers for a much-anticipated unveiling.

Buyers from throughout the island were all keen to check out the latest features of this exciting new model - and the Ferrari 296 GTB lived up to its billing.

The thoroughbred, in the words of the Italian car maker, is ‘the perfect marriage between sportiness and elegance’.

The 830 horsepower sports car with a top speed of 205mph has a cockpit that is very modern and futuristic.

The racing seats have been re-designed and are the epitome of Italian craftsmanship. Under the hood, Ferrari said: “This is the first time ever that we are using a V6 engine hybrid on a road car carrying the Ferrari badge.”

The masters of aerodynamic design have left nothing to chance.

Charles Hurst Ferrari Belfast believes the 296 GTB will attract unprecedented interest in both Northern Ireland and the Republic of Ireland and said that the Woodgate hangar was the obvious venue for the Ireland launch.

Noel Donnelly, Marketing, Charles Hurst Ferrari said: “The hangar has been perfect for us.

“Our customers have loved it.

“This has been our first launch in two years so everyone really got involved and the car has gone down really, really well.”

Noel teamed up with Riccardo Ronchi from Ferrari to unveil the eagerly-awaited highly-prized car.

Riccardo was also impressed with the location for the launch, adding: “It’s just beautiful, a stunning place to present such a car.

“ It matched perfectly with the surround, so it’s a perfect choice for the launch of the 296 GTB.”

The launch was also co-hosted by Shortcross Gin and Craft Event Company.

Woodgate Aviation Accountable Manager, David Shaw (pictured below) was delighted with the turnout for what was the best attended event since the hanger opened.

“Woodgate Aviation was the ideal venue to showcase the Ferrari 296 GTB.” he said.

“We’re here to deliver what they want in the air and Ferrari will look after them on the ground.”

Woodgate Operations Manager, Keith McKay, said: “To actually have the Ferrari team here from Italy to showcase their new vehicle for the first time in Ireland is huge.

“I’m pleased it has gone so well.

“We have worked with Charles Hurst in the past and they know what we can do in the hangar, and it makes the ideal location for a major event such as this.”

Business was brisk on the night, but the owners of their new 296 GTB will have to wait until late next year before they can take delivery of their prized possession - and it looks like the wait will be worth it.

Woodgate Aviation operates a fleet of piston and turbo prop aircraft, along with private jet management and handling services from its purpose-built, state-of-the-art hangar. As well as the Northern Ireland Air Ambulance they also operate the Isle of Man Air Ambulance. The company celebrated 50 years in operation in 2020.