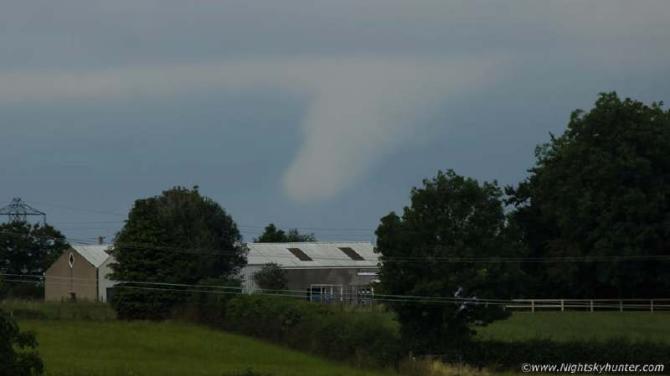 A ‘STORM CHASER’ has told of his first official sighting of a tornado in Northern Ireland - on the outskirts of Toome.

Martin McKenna, who runs the Night Sky Hunter website, spotted the cloud formation on August 9 after 16 years of searching

“I had been storm chasing all day with little luck then on the way home I saw awesome convection firing to the north east of Cookstown so I decided to drive out for a look.” he said.

“At 6pm as I rounded a corner I saw the best funnel cloud of my life far off in the distance, it was a massive solid white stove pipe seemingly going all the way to the ground, I was certain this was a tornado!

“Of course I was driving at the time and had traffic behind me and couldn’t get pulled over and the road was dipping in front of me and I would lose it from view.

“So I pulled over and got some shots of it as it was weakening. I wish I had been 15 minutes earlier and I would have got it at its full splendour.

“I arrived at Ballyronan Marina and I met people who saw the funnel/tornado who suspected it was in the Toome direction.

“I posted on my Facebook page and eventually several eye witnesses commented, they had phone video of the dissipating stage of the funnel rotating above their homes at close range which was fantastic, however it seemed no one got images of the stove pipe stage.

“However the most important comment of all was from a lady in Toome who said she saw the whole thing right over her house, she had no images, however she stated that football nets had blew over along with other debris in the garden which meant that there was indeed a ground circulation on the surface which confirmed that this was indeed a tornado.”