'Beating cancer was my Mount Everest, now my book will help others with their own climb' 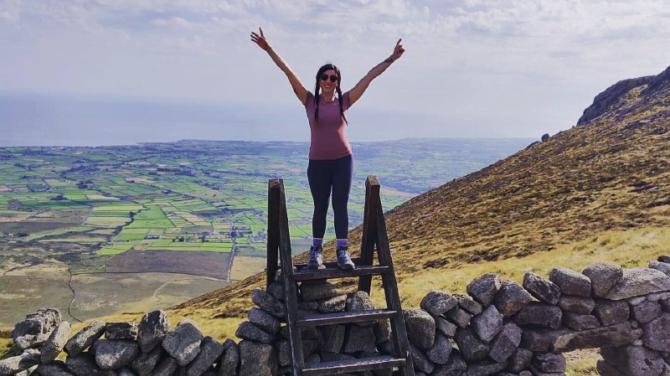 PARKGATE will be the location for the launch next month of a new book detailing a local woman’s ups and downs as she dealt with cancer.

Alex Quinn is 30 and is now in remission from what had been Stage 3 breast cancer.

She was diagnosed a month after her pet dog began sniffing her chest area.

Fittingly, Bear the black labrador remained at her side through good times and bad as she underwent gruelling treatment, including a single mastectomy, six rounds of chemotherapy and ongoing hormone treatment, which will continue for ten years.

Alex and her husband Graeme, from Burnside near Doagh, were already in training for a charity climb to Everest base camp when she got the bad news.

Graeme said that ‘cancer became her Everest’ and Alex vowed to complete a ‘bucket list’ of things she wished to do.

Having never really been interested in walking before, she took to the Mournes and found solace in the mountains.

The book is entitled ‘The Ascent’, after Alex had her own personal climb.

Alex, a mental health nurse who works at Belfast City Hospital, decided to write about her experience to try to help others, finding that there were few resources for someone of her age, with much advice and support directed at older women.

Her devoted husband Graeme said that the book acts as a guide for people on the start of their cancer journey, who may not know what to expect, and their families.

“It started off as a journal and how Alex was working through her bucket list,” he said.

“It’s about all the pros and cons, what to expect, what to do and say and what not to do and say. It touches on how families will react and how they might treat you differently.

“As a husband, I didn’t know what to expect either and I often said and did the wrong thing!”

Graeme said that he wouldn’t have believed that Bear would have been able to realise something was wrong unless he had seen it himself.

“The dog figured it out,” he said.

“Then about a month later the nipple started bleeding.

“The doctor thought it was an infection but when it persisted Alex had a scan, an MRI and a biopsy and cancer was confirmed.

“Bear knew a month before and he was always there for her, he never left her side, and he never shouted back!”

Having begun to walk just before the diagnosis, Alex kept it up, with Graeme, Bear and groups of friends and ‘fell in love with it’.

“We are still hoping to do the Everest base camp one day, Alex’s Everest was beating cancer, and the trip is what she wants to do and has dreamed of doing.

“While she was going through treatment, sometimes she did not make it to the top, her physical and mental health would not allow it.

“She is not yet at the fitness she was before diagnosis, but we will get there.

“But she has ticked everything off her list - the Cliffs of Moher, climbing Errigal in Donegal, going camping with the dog, riding a horse, going to Disneyland Paris on completing treatment, as she is a massive Disney fan.

“Now her focus is on using her experience to help other people, so many people have followed her and are reaching out to her and if she helps just one other person, then it will be worth it.”

The book will be launched at The Holestone in Parkgate on September 11 from 11am to 2pm and will be available from Amazon thereafter.

The book costs £12.99 and proceeds from the launch will go to the Breast Screening Clinic at Antrim Area Hospital, where Alex was diagnosed.

Her breast care nurse will also be in attendance at the event and can answer any questions in relation to the disease.