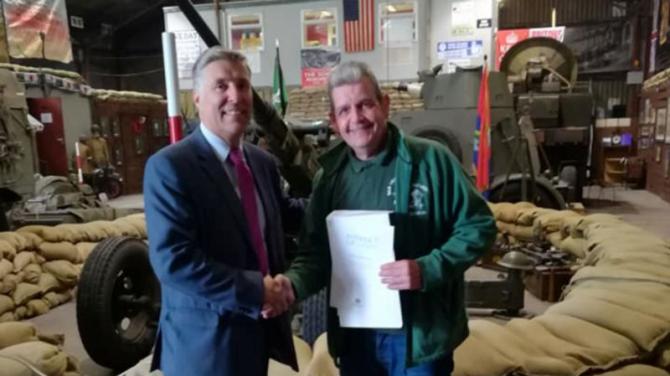 IT has battled flooding and a global pandemic and has received support from a world-famous military author and a British Lord and Baron, but now a wartime museum in the borough is facing a fight to survive.

War Years Remembered in Ballyclare is searching for a new home in the face of closure threats caused by the COVID-19 crisis and rising costs associated with Brexit.

It closed its doors on 10 July but is still fundraising for a new home and can open to limited visitors by appointment in the interim.

DUP leader Jeffrey Donaldson said that it would be a ‘shame and disgrace’ if the attraction were to close permanently.

The museum was set up in 1994 by David McCallion and hosts a large range of memorabilia which traces Irish military and social history relating to the First and Second World Wars.

The 12,500 sq ft warehouse includes an archive donated by the family of the highly decorated Ulster war hero, Lieutenant Colonel “Paddy” Blair Mayne, a founding member of the SAS.

The collection includes the only D-Day vehicle in Ireland plus tanks, armoured cars, motorbikes, medals, uniforms, helmets and decommissioned weapons.

The warehouse was hit by severe flooding in 2018, which caused thousands of pounds worth of damage.

Local people rushed to the aid of the museum and in recent months, inspired by the late fundraiser Captain Sir Tom, volunteers have now embarked on a drive to raise cash by using treadmills to walk 602 miles, the distance from the museum in Ballyclare to the beaches of Normandy, a journey undertaken by so many young men and women who fought in the Second World War.

Earlier this year, he backed a raffle in which the winner could have their name or the name of a nominated person given to a key character in his latest book.

Mr Lewis also generously offered to match the total collected, up to the level of £500.

David McCallion explained: “I started collecting when I was eight, when I got my granda’s chocolate tin and his military belt. I just got enthralled from there.

“I started it because we didn’t have an Imperial War Museum here like in England.

“Over the years so many people have been inspired and fascinated by the collection and the stories behind it and have donated their items because they wanted a full story to be told.

“There are a lot of artefacts here you will not find in any other museum in the world.”

Mr McCallion said the museum had hit financial hard times after they had to close their doors during the Covid pandemic.

He said: “We were closed up for nearly a year and a half.

“We rely on people visiting and making donations to cover our running costs.

“We are all volunteers here and not being allowed to have people in, we weren’t bringing money in.

“We applied for National Lottery money and Covid grants.

“We missed out on all the first grants because we were closed. Then there was the battle just to get our doors open again.

“Then we were closed down again.

“Being a small volunteer organisation, we do not have someone dedicated to funding applications.

“You needed a degree to fill the forms in and the only funding we got was a Local Restrictions Grant.”

Mr McCallion added: “The price of commercial rent has gone through the roof.

“We have to be out of this premises by the end of the year.

“There will be months of packing, taking down the exhibitions and displays. We haven’t got another building, we have nowhere to go.

“Putting all this into storage is not going to do anybody any favours. There are so many items here which tell what we gave during the war years and we are not getting any support.”

The museum founder delivered his message directly to the DUP leader Sir Jeffrey and South Antrim MP Paul Girvan when they visited the museum last week.

“I asked them directly to find us a building because the work that has been done, what we have achieved, cannot be lost.

“We have achieved so much,” Mr McCallion added.

Sir Jeffrey praised the “unique collection” at the museum.

He added: “We are here to talk to David and his team about what we can do to help him, what we can do to secure the future of the collection, how we can ensure that it continues to be on public display and to see if there is the opportunity perhaps for collaboration with the other museums or local councils that would enable War Years Remembered to continue operating as a museum.

“When you look at the unique nature of this collection, it would be an absolute shame and a disgrace if that collection had to be stored away and what we need to do is to ensure that the collection remains open to public display.

“I don’t want to see any of this collection end up in cardboard boxes.”