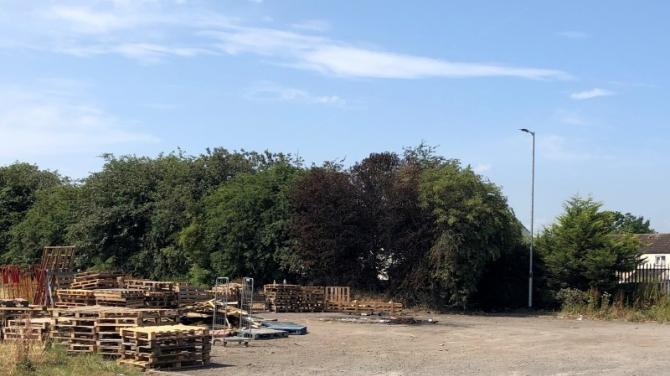 He has already launched blistering attacks on a blaze in Springfarm and a loyalist bonfire in the Steeple, which carried an effigy of him.

This week he has welcomed the removal of a bonfire being built adjacent to the Rathenraw, following what he described as ‘a partnership approach agreed between relevant agencies in support of the local community’.

“In response to representations from concerned residents about the building of an illegal bonfire on land immediately adjacent to homes in Rathenraw, and ongoing, linked antisocial behaviour, I met with senior management from relevant authorities, including the PSNI, to request that this situation be addressed,” explained the veteran republican.

“Local residents made very clear to me their total opposition to any plans for a bonfire, which they feared would become a magnet for widespread antisocial behaviour on their streets.

“Those most directly affected had already endured severe disruption on a nightly basis, from youths drinking and playing loud music into the early hours, and openly defying local appeals to desist.

“The environmental fallout from the random burning of fires each night was an added source of distress for residents. During what was the warmest spell of weather on record, windows had to be closed to prevent acrid smoke entering their homes.

“Other residents were anxious about the risk of fire spreading from embers settling on oil tanks and tinder dry hedges.

“All bonfires, including the type of opportunist antisocial gathering which was taking place, must be subject to existing regulations and strict enforcement.

“Having established that this bonfire was being built without permission from the landowner, it was therefore deemed illegal and a partnership intervention was agreed between the relevant authorities.

“Following discussions between myself, senior PSNI management, and other agencies, the correct decision was made to remove this bonfire and all associated materials.

“It was also agreed that the site would continue to be cleared, should there be any attempt to re-build the bonfire.

“I want to thank all the agencies involved for the decisive partnership approach adopted by removing this bonfire in the interests, and safety of the Rathenraw community.

“The template used in this case should inform how similar situations are addressed in future.

“I am urging that without exception, all relevant statutory bodies and government departments should meet their legal duties to ensure public safety has primacy at all times.”