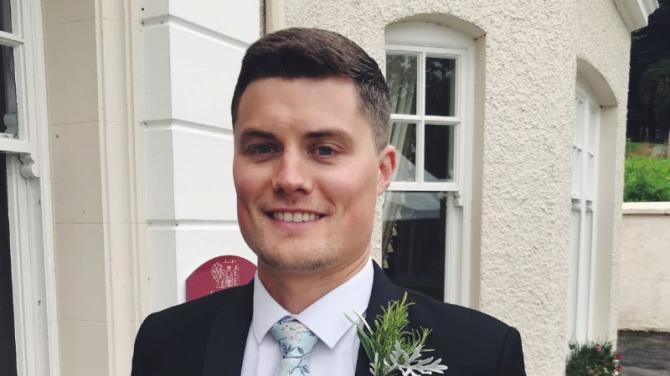 A PRIMARY school teacher from Antrim who is set to take on the Larne Half Marathon in aid of local mental health charity, AWARE NI, says it was watching his father experience depression that inspired him to help others.

Dave Caldwell (32) will run the marathon on 29 August and has raised over £500 already. He says he has seen the real impact that mental illness can have on a person.

“When I was in P6, my Dad’s mental health took a turn for the worse and before long, he was diagnosed with depression,” said the super-fit Liverpool fan.

“It stole his energy, his sense of fun and all his enthusiasm for life.

“He just wanted to be in the comfort of the darkness of his bedroom.

“Although I wasn’t aware of exactly what it was at the time, I realise now that Dad’s depression had quite a difficult impact on family life.

“There was still a real stigma about mental illnesses around 20 years ago, so it was difficult not having a huge amount of support.”

The 32-year-old’s father has since recovered and now, as an adult, Dave understands just how widespread mental illness is and how important it is to raise awareness.

Running for the second time - following the Manchester marathon in 2018 - in aid of AWARE NI, Dave says his fundraising efforts have received a lot of support.

“It’s been a community effort – seeing those donations coming through has given me such a boost,” he said.

“People are cheering me on whilst I’m cheering on AWARE NI that is there to support those who need help.

“I’m doing it for those people. I’ve seen the valuable work that AWARE NI does across our country by providing support and education to teach people how to look after themselves and give help to those who need a hand up.

“The folk at AWARE NI are equipping and empowering people to ‘fish’ and to look after themselves long-term.”

“With one in five adults in Northern Ireland experiencing mental health problems at some stage of their life, experiences like Dave’s, and his father’s, are very common,” she said.

“There are many children out there who have been impacted by mental ill-health and AWARE NI offers to support to people of all ages.

“We’re wishing Dave all the best for the half marathon.”

The groups provide a safe space to meet with others on a similar journey who can understand, encourage and suggest helpful ways of coping.

AWARE NI also delivers mental health awareness courses to schools, workplaces, community groups, and hospitals to equip people with the tools they need to best look after their minds.

For information on AWARE NI’s programmes and support, please go to www.aware-ni.org