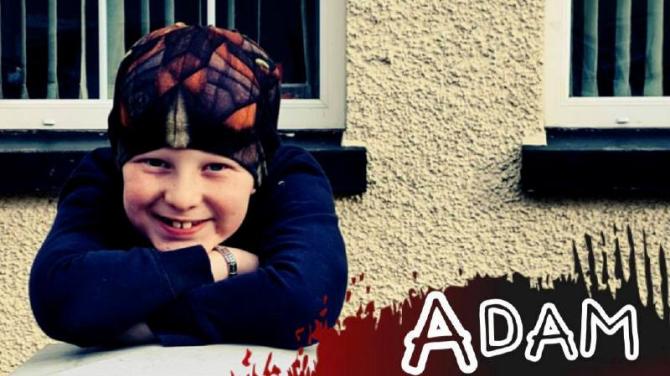 A RANDALSTOWN family has thanked Antrim Sports Club after a fundraiser lifted over £2,400 towards a charity which supports people with hair loss.

Nine-year-old Adam Burke developed Alopecia last October and like many young people, has struggled to come to terms with the change in his appearance.

Around two per cent of the UK population is currently living with alopecia, an auto-immune hair-loss disease that affects men, women and children of any age.

The onset of the hair loss is often sudden, random and frequently recurrent.

There are a number of different types of alopecia which determine whether the hair loss is in patches, affects the complete scalp hair or even the entire body.

At present, there is no known cure for any form of alopecia, although there are various treatments available to help promote hair re-growth.

While the disease itself is not damaging to bodily health in any other way, apart from possible changes in the appearance of the nails, coping with hair loss can prove challenging.

Adam’s Mum Ellen is a keen pool player and her pals Rab and Claire at Antrim Sports Club were keen to help.

A pool competition was organised earlier this month and was a great success, with £2,400 already being raised.

The family has also been donated a Celtic Centenary football top, signed by Paul McStay, Frank McAvennie and Billy McNeill, which they are currently raffling, with all proceeds going to Alopecia UK.

The family wishes to thank everyone who donated to the charity and gave prizes for the raffle, as well as Pauline Lynch, chairperson of the Northern Ireland pool association.

Adam’s grandmother Mairead said that the charity has promised to ringfence the money raised for Northern Ireland to help develop more awareness and support.

“It is hard for Adam as he has lost his hair, including his eyelashes and eyebrows.

“There are not too many people in the public eye that are talking about the condition, so it is difficult to help him to manage how he feels about the change in his appearance and how he deals with peoples’ comments.

“Like many young children he is self-conscious and there needs to be more awareness and help and people to speak out and say that it is OK to look different.”

Mairead said the family was delighted about the support they had received so far.

“The people at Antrim Sports Club really rallied around, they couldn’t do enough and we are delighted that so much money has been raised, the charity has assured us it will stay in and be spent in Northern Ireland so I hope a more local support group can be set up or one more tailored to children, and more awareness can be raised to educate people about the condition and help families on how to deal with it.”

Mairead was also full of praise for the Belfast company, Bandanas for the Brave, which makes head-coverings for children with hair loss.

The company was set up by Simon and Ellen Vance after their own son lost his hair after undergoing treatment for a brain tumour.

“Bandanas for the Brave has been so helpful and have made great bandanas for Adam so that he feels less self-conscious.” she said.