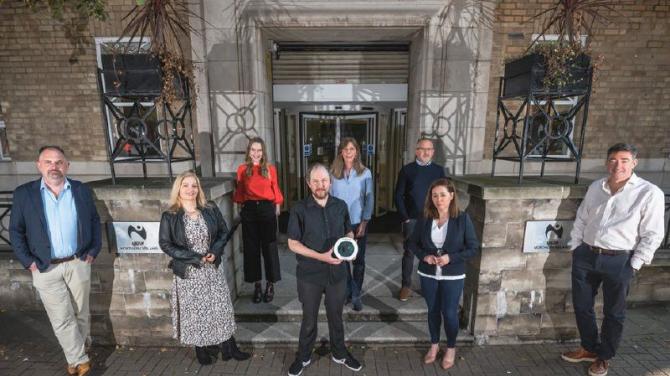 A TOP investigative journalist who began his career at the Antrim Guardian was among those honoured by Docs Ireland this week.

Conor Spackman is now a key member of the BBC Spotlight team, who were celebrated for their outstanding contribution to documentary film.

But his first foray into the newsroom came in 2004 when he joined the Guardian and for the next three years he learned his trade.

Armed with a forensic eye for detail, he raised heckles at the Civic Centre with a string of provocative pieces on Antrim Borough Council - even once memorably interrupting a meeting when he felt the members went too far criticising press intrusion into their affairs!

Since leaving Antrim he has worked with Panorama and more recently Spotlight, creating an award-winning body of investigative work.

It was Conor who first broke the news of the RHI scandal, and he has gone on to make no fewer than three films on the subject.

The story sent shockwaves along the corridors of power, and contributed to the collapse of Stormont.

Gambling machines, windfarms, Brexit have all fallen under his gaze since then - but who can forget the role that he played in the Panama Paper controversy which very nearly led to the fall of then Prime Minister David Cameron?

The Panama Papers truly was global news, lifting the lid on the extraordinary lengths the super rich could go to hide their wealth.

Hundreds of journalists, working for 107 media organisations in 76 countries collaborated on the shocking expose into the papers leaked by the notoriously secretive Panamanian law firm Mossack Fonseca.

Together they trawled through 11.5 million documents, uncovering disturbing evidence of money laundering and tax avoidance on an epic scale.

World leaders were embroiled too. The Icelandic PM was the first to fall on his sword.

It was an uncomfortable time for David Cameron too, with his father Ian’s links to Mossack Fonseca and his own off-shore shares sparking dozens of national front page headlines and the bumpiest of bumpy rides at Prime Minister’s Questions.

And he had Conor Spackman to thank for that - for it was the intrepid local reporter who charted a course through the labyrinthine mountain of documents to follow the Panamanian paper trail right the way back to Number 10.

Joining Spotlight was a natural next step, The programme first aired in 1973 and has since broken major stories, including RHI and illegal dog-fighting rings.

Jeremy Paxman, Gavin Esler and Alex Thomson are among those to work on the programme over the years.

Stephen Hackett, head of programming at Docs Ireland, said Conor and the team ‘have told essential stories, investigated corruption, and examined a wide range of socio-political issues that impact all our lives’.

A range of Spotlight's work is being shown at the Ulster Museum as part of this year’s Docs Ireland festival.

Spotlight editor Gwyneth Jones said it was an honour to receive the award.

“It's a reflection of almost 50 years on the air and acknowledges the team's commitment to telling significant stories, asking hard questions and holding to account,” she said.

So what’s next for Conor? When he’s not working on his latest scoop, the former Guardian man is often hunched over the chess board.

He has won a clutch of titles in recent years - his unerring knack for thinking three or four moves ahead making him a formidable opponent.

You can rest assured that you will read all about it when this chess master makes his next move!

The Panama Papers and the RHI scandal may be a long way from his formative days in Antrim, but he insists that it was there he developed the tools that would later shake governments.

“Quite a few years have passed since I worked as a junior reporter at the Antrim Guardian,” he said.

“Nevertheless, the same journalistic disciplines I gratefully learned from senior colleagues at the Guardian are still brought to bear.

“Enthusiasm and meticulousness combined with the required dose of scepticism - and no room at the inn for those lacking the discipline necessary.”