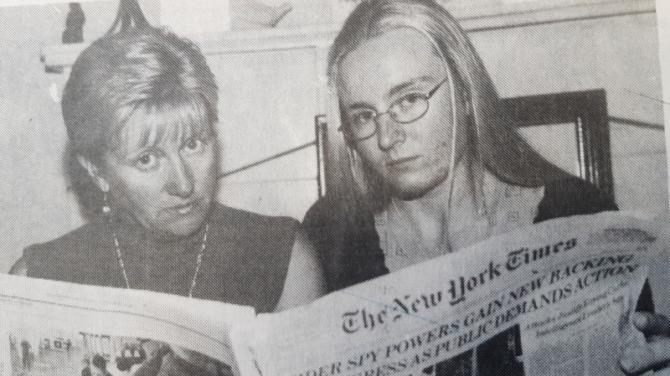 AS the 20th anniversary of one of the world’s worst terrorist atrocities looms into view, one Randalstown family is seeking to thank the people who came to their aid after they were stranded in the USA in the aftermath.

Mairead Burke (below) and her family were stuck in Memphis, Tennessee with dwindling funds and no way home in the days following the 9/11 Al-Qaeda strikes on New York’s Twin Towers and the Pentagon Washington, which killed almost 3000 people.

Chillingly, they had been in the Big Apple the previous week and had they stuck to their original plans, would have been in the city and possibly even inside the World Trade Centre on the day of the calamitous event.

They were helped home thanks to the kindness of local people and a generous Northern Ireland man, but have since lost touch with those who assisted them.

Now, with access to vastly improved technology and communications which did not exist for most people back in 2001, Mairead wants to get in touch with the people who came to her aid.

“We had planned a trip to New York and to Memphis, Tennessee in late 2001 because I just love Elvis,” said Mairead.

“The travel agent told us it would be cheaper to do New York first and then Memphis. We had intended to do it the other way around - if we had, we would have been in New York on September 11. We had even been in the World Trade Centre.”

While the Burke family had escaped harm, the ensuing chaos caused by the grounding of all domestic flights in the aftermath of the strike on the Twin Towers meant that they were stranded in the USA just before they were about to fly home.

“We were stuck and we had come to the end of our money and we couldn’t get home, my husband thought he was going to lose his job.” she said.

“We did an interview with a news channel and once the word got out, the local people could not have been more helpful, they brought us money, offered us help, fed us, clothed us, put us up.

“They couldn’t have done enough for us and I will never forget it. The Irish American community were especially helpful.

“The hotel was great and very understanding, but they had bookings and we were about to be moved to a naval base to stay when a woman, originally from Martinstown, whose husband, called Tom McGladdery, ran a fleet of limos for airport pick-ups, heard about our plight. He had a lot of connections and pulled some strings and got us home. We were there for about five days and the people really reached out to us.

“But it ruined flying for my daughter Emma, she cried the whole six hours home in 2001.

“It sort of put me off as well, although I have been over to visit an elderly aunt in America since.

“We did visit Ground Zero and the memorial, it was beautiful, there was an eerie silence, but every so often, the sound of a plane going overhead, which really scared me.

“We were only really on the periphery of what happened, so I can’t imagine what it was like for New Yorkers. I still cannot watch any movies or documentaries about that day.

“I just hope that the people in Ireland and England looked after the American people who were stranded when they were stuck over here.”

Twenty years have now passed and Mairead says she has misplaced all the contact details she had for her helpers in Tennessee and indeed for the McGladderys - a situation she wants to rectify.

“Alderman Mervyn Rea gave me a shield with a coat of arms on it, which I wanted to send to the people of Memphis, but back then, I called the council buildings and the fire brigade and anyone else I could think of, but no one could tell me where I should send the gift or who would want to accept it.

“I would still like to send those people a token of our thanks, perhaps a new plaque, and I would still love to properly thank Tom McGladdery or his family for the help he gave us.

“I was really scared that we would die out there. I just want people to know that I have never forgotten their generosity. I even had the name of the lady who interviewed us on television written down somewhere.

“If we had gone to New York the same day, week about, we would have been in the Twin Towers, but God had other plans for us.”