Council to intervene after rise in popularity of open water swimming 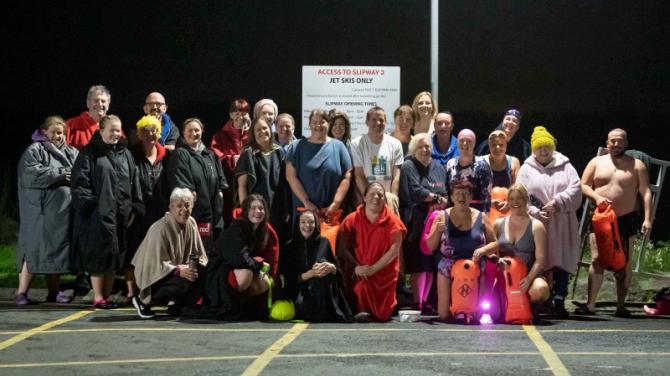 ANTRIM and Newtownabbey Borough Council is set to become a ‘Bathing Water Operator’ after a surge in popularity in open water swimming.

Correspondence has been received from the Department of Agriculture, Environment and Rural Affairs (DEARA), advising that the Department intends to formally review Northern Ireland’s bathing waters in 2022 and is seeking nominations for locations that should be included.

According to a report due before the Operations Committee this week, following a review in 2017, there were no areas in the Borough identified as having swimmers in sufficient numbers to qualify as nominated Bathing Waters.

However more recently, and particularly, during the 18 months since the COVID-19 pandemic, open water swimming has increased in popularity.

Some locations within the Borough, most notably the Antrim and Jordanstown Lough Shore Parks (including Hazelbank), have seen an increase in groups and individuals participating in open water swimming.

Groups like Antrim’s Chilli Dippers (pictured above) have been flocking to the water to enjoy outdoor exercise and companionship during lockdown and the associated closure of leisure facilities.

In order to be for a nominated location to be considered as a formally identified bathing water, a number of criteria must be met including provision of initial usage evidence at the site - the selection criteria for candidate sites is over 45 bathers on at least one occasion or over 100 beach users on at least two occasions across a review period.

Evidence is also required that bathing is not prohibited or inadvisable for reasons of safety and there must be provision of information about site facilities for example, signage, litter collection, site access, car parks, life guards and changing facilities.

DAERA is also seeking confirmation from an appropriate body that it is willing to take on responsibility as the bathing water operator.

Following a nomination, the Department surveys the nominated locations to determine if they meet the criteria.

In the event that survey verifies the numbers, the Department will then undertake a public consultation with a recommendation that the candidate site be formally identified as a bathing water.

If approved, council would then become a bathing water operator and take on the statutory responsibilities required by the regulations.

The responsibilities which council would assume as an operator include ensuring that signage at the bathing water includes the required information.

In the event of pollution incidents, abnormal situations or exceptional weather events that could be considered a risk to human health, council should consult with the Department, inform the pollution hotline, take appropriate management measures to protect bathers health provide information to the public, where necessary, remove any waste and if necessary, issue temporary advice against bathing.

In the following bathing season, signs must display the appropriate classification and the symbol advising the public against bathing and supply information stating why the site is not recommended for bathing.

The deadline for notifying the Department of any nominations was August 20, however, due to the short turnaround, council officers have indicated to the Department that council would be asked to consider the nomination of Antrim and Jordanstown Lough Shore Parks (including Hazelbank) and that once a decision has been made, they will be notified.

It was therefore due to be recommended that council agrees to become a Bathing Water Operator to facilitate the nomination of Antrim and Jordanstown Lough Shore Parks (including Hazelbank) as formally identified bathing waters.