Randalstown WW1 veteran to be honoured in special service 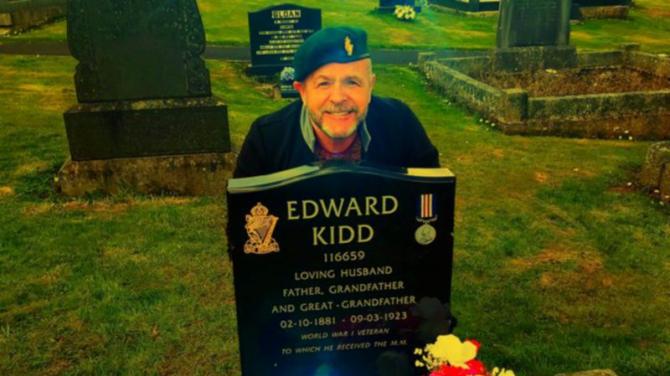 A RANDALSTOWN man who bravely fought for King and country in the Great War is to honoured in a special service later this month.

The final resting place of Edward Kidd, who served with distinction at the Battle of The Somme, was recently located by his grandson, Alastair Kidd, in the grounds of Second Randalstown Presbyterian Church.

Alastair has tended to the grave ever since and had a new memorial stone erected.

On Saturday, September 25 the memorial stone will be dedicated and a brief service will be conducted.

Alastair, himself a former Serviceman, said he was honoured to salute his grandfather.

“Edward, who was my dad’s father, received the Military Medal for bravery due to his heroics. He was in the Royal Irish Rifles.

“He had been in the Army before the outbreak of the war and I knew he had fought in World War One, but I didn’t know where he was buried.

“There were 12 of us and my father wasn’t too sure where the grave was located. It’s only after doing a bit of research that I was finally able to find it.

“After locating his grave at Second Randalstown Presbyterian Church I have erected a memorial stone to pay tribute to him in the cemetery.

“The new stone, which was created by a monumental mason in Carrickfergus, includes my grandfather’s service number, the crest of his regiment and an image of the Memorial Medal.

“During the memorial event, a minister will conduct a brief dedication service and a piper will play.

“As a family we are very proud of him and it is only fitting that there is a suitable headstone to commemorate his life and distinguished military service for his country.”

Military records online state that at the time of the 1911 Irish census Edward Kidd, an agricultural labourer and an Anglican, and his wife Margaret, both 28, lived at Ballygrooby, Randalstown.

They said they had then been married for 11 years and that six children born of the marriage were still alive.