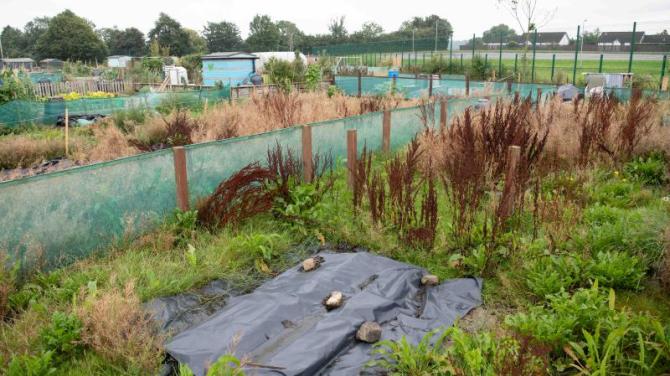 THE council has promised action after disgusted allotment owners raised concerns about the state of some abandoned and unused plots at Greystone.

One irate gardener contacted the Antrim Guardian to fume: “Some of the weeds are six feet high and they are blowing seeds into the allotments of people who are actually taking care of their plants and trying to grow things

“Apart from that some of the plots are a total eyesore, with debris and rubbish lying everywhere and there is also a vermin risk.

“The plots are only £36 a year so it’s hardly an incentive for anyone to look after them if they cannot be bothered.

“The amount of money that the council has to spend, bringing in diggers and contractors and landscapers in to help tidy them up is costing the ratepayers.

“Then after a few weeks or months, it’s as bad as ever.

“There need to be more penalties for people who get a plot and don’t look after it.

“Some genuine people are crying out to get a space here and they can’t, meanwhile the unused plots are going to rack and ruin.

“I’ve contacted the council on numerous occasion and nothing gets done.

“Maybe people didn’t think they were allowed to, or didn’t want to come over lockdown, but they should have let council know.”

However when the Antrim Guardian contacted Antrim and Newtownabbey Borough Council, a spokeswoman said that a review was taking place.

“An assessment of the allotment site at Greystone is already underway and landscape works will be carried out across any unused plots to ensure they are up to the required standard.” she said.

“We are also contacting the owners of any neglected plots to request that their site is either maintained to the expected level or returned to the council.

“Any vacant plots will then be offered to those on the waiting list.

“We set allotment prices so that are affordable and accessible to all our residents, as there is great demand for plots.

“In line with our pricing policy, costs are reviewed annually and approved at a council meeting.”

The allotments at Greystone were allocated in 2014 and are managed by Muck and More Allotment Association, which has worked hard to gain funding for more facilities including a toilet and secure storage area.

The fence around the allotments has had to be heightened to deter vandals which once plagued the site.

There was rejoicing last year after the council relented and re-opened allotments across the borough after initially locking them up because of the COVID lockdown.

The Muck and More Allotment Association thanked the council after their campaign to be allowed access to the Greystone facility proved successful.

Back in March 2020, there was anger when council shut the gates, with claims that fruit and veg would go to waste at a time when self sufficiency and outdoor exercise has never been so important, and a campaign, backed by the Antrim Guardian, took root.

At the time, Antrim and Newtownabbey and Mid East Antrim Councils were the only councils of the 408 in the entire UK that had closed their allotments.