Lights camera, action for Tidy Randalstown as the Royal Horticulture Society drop by! 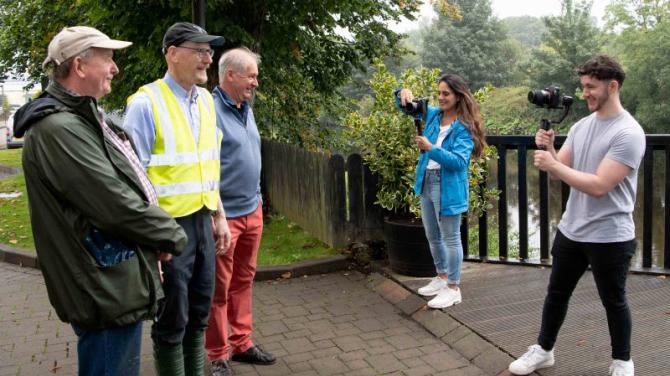 THE volunteers of the award-winning environmental group Tidy Randalstown had the chance to bask in a little limelight last Wednesday when a filming team commissioned by the Royal Horticultural Society visited the town to film their work and achievements.

Director Amee Fairbank and Matt Atherton from Lizardfish TV arrived from Manchester bright and early and spent a full day filming the gardens, floral displays and the volunteers at work.

Tidy Randalstown has twice won gold in the RHS’s Britain in Bloom competitions and, despite the suspension of the competitions over the last two years because of the coronavirus pandemic, has kept the RHS up to date on its activities.

One aspect of the volunteer group’s work which has attracted the attention of the RHS has been Tidy Randalstown’s success in regenerating areas long disused or neglected for the benefit of the whole community.

The most notable examples of this are the Widows’ Row Garden on the Portglenone Road which opened in late 2017, the ‘Mainebrook’ landscaping project undertaken at Maine Fold and Neillsbrook Road in 2019, and the 2020 transformation of the Heritage Garden on the former railway embankment below the Viaduct Path.

The film crew spent time recording the volunteers at work in all three locations and also met some of the residents of Maine Fold.

Nor were the colourful planters and hanging baskets lining Main Street and New Street neglected!

The team of eleven volunteers who were out on Wednesday morning joined Amee and Matt for a socially-distanced coffee break at the Viewpoint.

George Williamson from Antrim and Newtownabbey Borough Council was also on hand, reflecting the close and supportive partnership that exists between the Council and Tidy Randalstown.

The RHS will use material from Randalstown and elsewhere in the UK as part of its education and promotional programmes while Tidy Randalstown and Council will also be able to make use of the video that emerges from Wednesday’s filming.

Helen Boyd said they welcomed the opportunity to highlight what the group had achieved to date.

“We are delighted and honoured that when the RHS decided to come to Northern Ireland they chose to showcase the work of Tidy Randalstown,” she said.

“It’s a great tribute to the hard work of all our volunteers and also to the fantastic support we receive from the local community, businesses in the town, the Council, and all the sponsors and funders who have helped us bring our projects to fruition and realise our vision.”