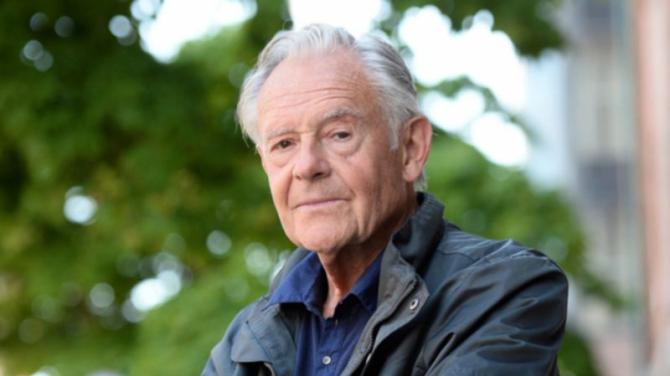 IF you asked the good people of Antrim to name the town’s most famous literary son, chances are most would probably opt for Alexander Irvine.

His reputation is largely based on the ultimately uplifting story of how love conquered the hardships of his own impoverished upbringing in 19th century Antrim.

Yes, the praise lavished on ’My Lady of the Chimney Corner’ is richly deserved and for a time it brought him global recognition. Though its popularity may have waned in recent years, he has a park named in his honour and a public artwork just beside his humble homestead which has been carefully preserved for posterity.

But there is another. Just ask George O’Brien, a Professor Emeritus of English at Georgetown University in Washington DC.

He was asked who was the most under-rated Irish author and, quick as a flash, he named another local man - a writer raised in Muckamore whose work down the decades has been shaped by that countryside and its people.

“I do think Maurice Leitch is inexplicably the most under-valued Irish novelist of the past 50 years,” he said.

Well? Does the name ring any bells? If not, it probably should.

The local man has been writing books, plays and short stories for more than five decades now, winning the Guardian Fiction Prize and the Whitbread Prize along the way - and at the age of 88 he is still hammering the keys.

Make no mistake, this is a serious talent. And while he has been critically lauded by critics on the other side of the Irish Sea, he has been criminally over-looked much closer to home.

His story began back on July 5 1933. From an early age he had a precocious interest in reading, which was wisely indulged by his parents Jean and Andrew.

And it seemed for a time that he would devote his life to encouraging that same interest in others. He trained to be a teacher at Stranmillis, and then returned home to teach at Antrim Primary.

A few years back Donald N Mackay and Theresa McKay produced a fascinating book celebrating the local man’s many achievements - and they spoke to some of the people who met him during that time.

“We didn’t set out to meet people who might have known Leitch when he taught in Antrim. But, by accident, we came across a few!” said Donald, who sadly has since passed.

“Kate Crawford was one of his pupils. She told us that, in those days, teachers had to take gardening classes. She recalls that, on Leitch’s instructions, they dug holes.

“Once dug, the holes were abandoned. What purpose they were to serve was never explained.

“Stanley Lynn, who owned a framing business in Antrim, told us the same story. He added that Leitch had a good sense of humour and was one of the less strict teachers.

“Stella Esler attended the school...and she remembers him as being friendly and kind.”

Davy McMeekin recalled that he was ‘quare and quiffy’ - local parlance which suggested he was well dressed ‘with a hint of dandyism’.

He enjoyed his time at the school, but he was not content to teach from books - he wanted to write them.

He penned a series of pieces about the Antrim countryside which were published in the Belfast Telegraph.

He then moved on to short stories for Northern Ireland Children’s Hour, before joining the BBC Features Department in 1960 as a producer and writer.

Adding Radio Drama to his repertoire in 1960 with The Old House - which starred a young James Ellis - he also worked on documentaries.

Behind the scenes, however, a novel was taking shape in his head and in 1965 ‘The Liberty Lad’ was published - and its portrait of a schoolmaster, a threatened mill closure and a corrupt unionist politician was soon creating controversy.

Its unusually frank representation of sexuality, including male homosexuality, saw it placed on the Banned List south of the border.

“I did get a lot of backlash, from people who knew me socially and from the village I came from,” he said.

“It still affects certain people. It seemed terribly shocking that I would actually mention the fact that homosexuality existed, particularly in an Irish context.”

Trail-blazing stuff, but it did not endear him to some pillars of the Northern Ireland literary establishment who felt he was ‘letting the Protestant side down’. The former school master, it seems, was teaching some uncomfortable home truths.

Undeterred, his second novel ‘Poor Lazarus’ was published in 1969 - and it, too, was promptly banned in the South.

A pattern was emerging so, in 1970, Maurice Leitch packed up his life and moved to London.

While still working with the BBC, Leitch remained drawn to home and as the Troubles intensified his work became darker too - much of it set in his old stomping grounds, with local names thinly veiled.

In 1981 he also won the Pye Television Award for New Television Writers for ‘Rifleman’. It tells the story of Private Semple who returns to his Antrim home after the Battle of the Somme. He was the town’s sole survivor from all the ‘brave boys of Ulster’ who volunteered, but it soon became apparent that the battle scars went far deeper than anyone suspected.

He returned to the Antrim area in 1983 for ‘Gates of Gold’ for the BBC1 Play for Today strand. Set in 1959, it tells the story of two touring evangelists who stirred up religious fervour in the quiet Presbyterian backwaters.

His literary output continued too, producing a new novel every four or five years - the most recent being ‘Gone to Earth’ in 2019.

Speaking to the Antrim Guardian shortly after his 80th birthday he insisted that his story is far from complete.

“You never put the brakes on. Writers are very lucky in that they can continue for a very long time. I am at the stage now that I want to continue to write,” he said.

“Anyone can write a book but whether it can be published is another matter. People can publish their work on the internet now. The most important thing about writing novels is whether you want to continue doing it after that first book.

“Writing novels is a marathon and never a sprint.”

And while he may have lived most of his life in the capital he admits the faces and places of his home town are never too far away. It is still, he said, ‘my place’.

“I am adamant that the connection doesn’t weaken,” he said.

“London is, however, a place where a writer can disappear and is not subject to the same pressures. Antrim, though, is still my place.

“I still watch the news on satellite TV and when I hear the accent I am brought right back there.

“I don’t necessarily have to be there. It is a different place from when I was there but the countryside and the nature of the people are still the same - they haven’t changed, of course.”

It has truly been a remarkable career. Over six decades he has published 15 books, penned five TV screenplays and more than a dozen radio plays. He even found time to act as editor for Radio 4’s Book at Bedtime for several years. He was also the man behind over 30 readings of Terry Pratchett’s Discworld novels read by Blackadder star Sir Tony Robinson.

That is a CV and a half, by any standard.

But where is the recognition for this rare talent in his home town? It was a question that certainly perplexed life-long fans Donald MacKay and Theresa Mckay.

“We suggest that he be offered the Freedom of the Borough. We have no idea who makes that kind of decision or how it is arrived at. Our guess is that councillors must become involved somewhere along the line.

“We also suggest that the Queen’s University of Belfast award him an Honorary Doctorate.

“Of course, Leitch may not want these awards. But that is besides the point. He should at least be offered them. They are long overdue.

“Leitch has written some first class novels. As far a we are aware there is nothing in the town or the village of Muckamore in his honour.”

His readers will undoubtedly agree.

Yet while Maurice Leitch may not have received his dues - not yet, at least - he has already written his legacy in a body of work that will live on long after he is gone.