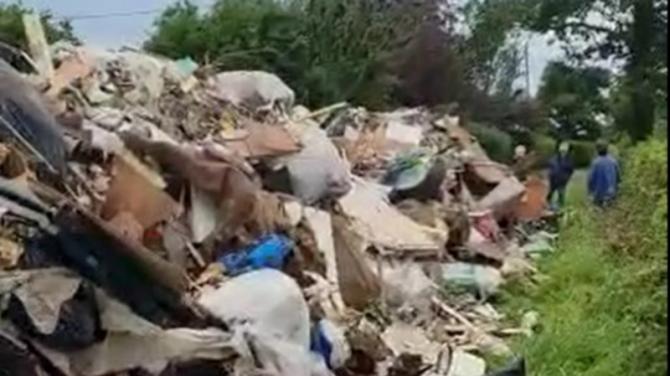 INVESTIGATIONS are underway after tonnes of rubbish were dumped in a rural laneway on the outskirts of Antrim, trapping residents in their homes.

It is understood that Antrim and Newtownabbey Borough Council intervened and helped to take up to ten skipfuls of waste away from the Rathbeg area.

Some estimate that there was around 14.5 tonnes of trash abandoned in the private access lane.

Five households were left stuck after someone dumped multiple lorry loads sometime between 7pm on September 22 and 7am on September 23, including gas canisters, household waste, construction materials and bath tubs.

Local UUP rep Paul Michael said he couldn’t believe what he was seeing when he received footage of the incident.

“I received the footage over the weekend and could not believe what I was looking at.” he said.

“The very scale of the dumped waste on a rural country road in the borough was totally and utterly shocking, extending many meters down the road.

“I will be meeting with council officers to investigate the contents of the waste and hopefully we cam bring forward maximum prosecutions to those who see our country side as a dumping ground.

“A number of residents could not leave their homes due to the level of waste blocking them in, also Northern Ireland Environment Agency is currently working with council to trace those responsible and implement prosecutions.”

The council said it was made aware of the incident and officers visited the site along with staff from DFI Roads Service.

A spokeswoman said: “The waste was transferred to containers and then removed and transported to a waste management site.

“Officers from the Northern Ireland Environment Agency, which has lead responsibility for enforcement in this instance, will check through for evidence as to where it may have come from.

“The council condemns fly-tipping of any nature and would remind the public that if they see any incidents of fly-tipping they can report these via our online portal which they can access via the council website.”

One resident said: “I really cannot believe that someone could be so selfish and inconsiderate to dump this amount of waste and debris, never mind the fact that it is blocking all access in or out to five homes, the majority of which have older residents.

“If there was an emergency there would be no way that a fire engine or ambulance would be able to make it to our houses.

“I saw it when we were taking the dogs out for a walk this morning and there was no way that we could even walk past it with them, the whole lane has been blocked.

“A council worker who was here said that there were at least three lorry loads of rubbish dumped here and there were concerns some of it could contain asbestos or other harmful substances.

“It is just unbelievable that someone could do this, it is like someone has demolished a house and dumped it down our lane.”